Fire In The Sky Lyrics

Fire In The Sky Lyrics


Prometheus, they say, brought God's fire down to man.
And we've caught it, tamed it, trained it since our
history began.
Now we're going back to heaven just to look him in the
eye,
and there's a thunder 'cross the land, and a fire in
the sky.

Gagarin was the first, back in nineteen sixty-one,
When like Icarus, undaunted, he climbed to reach the
sun.
And he knew he might not make it, for it's never hard
to die.
But he lifted off the pad and rode a fire in the sky.

Yet a higher goal was calling, and we vowed we'd reach
it soon.
And we gave ourselves a decade to put fire on the moon.
And Apollo told the world, we can do it if we try:
And there was one small step, and a fire in the sky.

I dreamed last night of a little boy's first
spaceflight,
Turned into me, watching a black and white TV.
There was a fire in the sky, I'll remember until I die.
A fire in the sky...a fire in the sky! Then two decades from Gagarin, twenty years to the day.
Came a shuttle named Columbia, to open up the way.
And they said she's just a truck, but she's a truck
that's aiming high.
See her big jets burning, see her fire in the sky.

Yet the Gods do not give lightly of the powers they
have made.
And with Challenger and seven, once again the price is
paid.
Though a nation watched her falling, yet a world could
only cry.
As they passed from us to glory, riding fire in the
sky.

Now, the rest is up to us, and there's a future to be
won.
We must turn our faces outward, we will do what must be
done.
For no cradle lasts forever, every bird must learn to
fly ---
And we're going to the stars, see our fire in the sky. 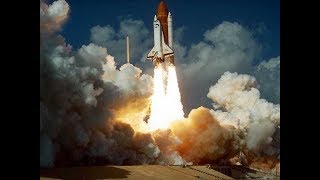 check amazon for Fire In The Sky mp3 download
these lyrics are submitted by kaan
browse other artists under K:K2K3K4K5K6