[Juvenile]
Welcome to tha section where it's hotter than a bitch
Niggas breakin' up bricks.. niggas tryin' ta be rich
Dope ounce, get hit.. armed 'rilla and six
Somebody wig get split for ten g's of chips
It's where the Feds'll dip through
Enemies get you
Catch you at tha second line, niggas'll flip you
Kids get outta school, they swingin' they fists, too
Jump one of them children and they bringin' they clique, too
L.V. buckin' 'cause T.C. killin' ain't nothin'
Them blues try ta hit ya, and your head'll get druggin'
On New Year's tha lights get shot out at six o'clock
Four or five o'clock in tha mornin' you gon' be gettin' shot
Niggas gettin' chopped, gettin' shot in tha cro'(tch), bruh
Drug deal gone bad, one of them cats is sour
Motherf*ckers gettin' chopped up and they holla
(?) beam aimed at your dome... for some powder
I'ma do like your boy and hop in tha Eddie Bauer
Get all seventeen and, nigga, I'ma holla

[Juvenile] Is ya ready for it? Better be over-prepared
When ya enter ya see a sign, say, "SOLDIERS BEWARE"
They be ragged up, twenty-five dollars bagged up
Old nickel tucked in tha back of his 'Baud cuffs
Well aware on the route that he's gonna duck
If somebody thinkin' 'bout jammin' him up
If a bitch with him, she better be smart, or tough luck
'Cause he gon' break and bust, she gon' be f*cked up
Mind your business is a code, too, I never told
Ever since a nigga was a million years old
Bein' a baller.. shot caller.. is tha goal
I'll hospitalize anybody... in the ward
Ta make it there, you talk crazy, we take it there
You'll be like a steak, nigga, you medium-rare
All these niggas wanna be (?) or tha man in charge
With tha AK-47 it'll change you boys 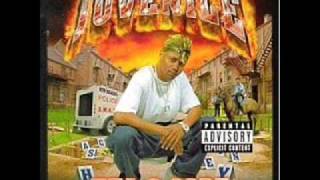