[Jumpsteady]
Juggalo lives are full of complications
Are raised to survive on a street education
Always realize that there is a limitation
If we don't school life with a fresh occupation
Without society there's no communication
We feel a lot of hate, a lot of frustration
But we are driven by the realization
That we don't wanna be a sheep in this population
So we ascend through the madness without a fall
As we climb our way to the gates of Shangri-La
Living life can leave your mind in a twirl
When you stuck in the middle of a mad, mad world
[Violent J and Shaggy 2 Dope talking]
[Jumpsteady]
Look at Afghanistan and what do you see?
War stalkin the children and the elderly
And when you look in their eyes, all you see is peace
Because from the agony, they wanna be released
You see they're fighting for their lives with every breath
Against famine, disease, and the plot of death
Now this was once a peaceful nation
But then came the plague that they call starvation
Now the stomach feels pain, shocks the brain
Cause the bombs drop from the sky instead of rain
And the land is dry while the mothers cry
And the babies that are born are born to die
You see the fear on the faces, dust in the air
The attitude we take is "I Don't Care"
But I guess it hurts us more than any other
As the Illuminati controls us all like big brother
Death is walkin the nation, take the boy, the girl
And all I say to myself is it's a mad, mad world
[Talking]
[Jumpsteady]
It's a mad, mad world whether you're poor or rich
Because you're livin with the probs that you're tryin to ditch Whether Amy's in the attic, your husband has left
And you have to pay for the bills of you sickly son's death
Mentally of few, they're in and they're out
Your stress point builds up, you're ready to shout
But let me tell ya a lil something, that will not work
Cause all you find out will probably hurt
Can't pay for your rent so you try to hide
And when that doesn't work, you commit suicide
And now who has you problems? , you little girl
And do you know why?, cause it's a mad, mad world
[ICP talking]
[Jumpsteady]
Let's take of for the horrors of the Gulf War
Left us in the desert, never told us what for
Some thought that they would be heroes, thought their destinies were bound
But field of bloody corpses were all we ever found
"Why are we fighting the wars", what a lot of people said
While parents prayed every night that their sons weren't dead
To mommy's little boy, left him in a foreign land
Said, "You're fighting for your country, you better be a man
Better watch yourself, kid, and do the best you can
Cause one wrong move could mean you're dead where you stand"
We finally get home, another war's goin on
Some are saying that we're right while others say we're wrong
Anger turning out to our becoming outcasts
With a bitter hate and a pain from the past
No one understood my feelings of confusions
Said I was a feel, was living an illusion
Thinking of society and how I must adjust
Dreamin of my buddy who was blown in the dust
Gotta chip on my shoulder that ways about a ton
Cause I seen to much killing before the age of 21
Explain lyrics
Correct lyrics 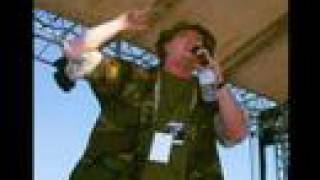