The clock was stickin' close to ten, the mailman came runnin' in
He said, "Anybody here named Johnny? I got a special delivery for him"
"It's from a woman he knows, it's from his Bayou Rose
The girl of his dreams wants a wedding ring"
Love Rosie, "I've got a letter for him", that's what the letter said

The piano-man came even though it was rainin'
The drummer was drummin' just like and insane man
They tore off the roof, they knocked down the doors
And Johnny and his bride drove away in her Ford

Slappin' that dash to the beat of the band
Draggin' behind them a string of tin cans
And he ain't been back yet but I know when he do
Well Johnny's gonna play some of the meanest blues
Well go Johnny, yeah go, go, go Johnny
Explain lyrics
Correct lyrics 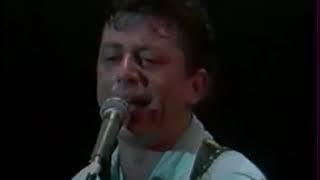