I was mindin' my own business down on Deep Elum Street
The sun was comin' up and the birds was singin' sweet
When a car come around the corner, long and lean and brown
Pulls up to the curb beside me and rolls their window down
A man throws me a dollar and I asked him what's that for
A pack of Luckies and a Paper over at the corner store
I peer into the window there's a man and a woman inside
Holy Jumpin' Bolts of Lightnin' it's Miss Bonnie and Mr. Clyde

I made a joke about Lucky Strikes that I never should've used
Their patience was proportional to the shortness of their fuse
Bonnie's pretty little trigger finger was twitchin' by her side
And Clyde was cleanin' his fingernails with a foot long Bowie Knife
I brung 'em back the Cigarettes and the Dallas Mornin' Sun
I told 'em they made the papers front page and column one
Ah, we don't need no smart-assed kid actin' as our guide
Now just run along like you never seen, Miss Bonnie and Mr. Clyde

Excuse me sir I says to him, but I thought you was a business guy
I might have a little proposition that just might catch your eye
The biggest haul of Fort Knox Gold they're a'haulin back tonight
And loadin' it up in an Armored Car at the crack of the mornin' light
Bonnie grabbed me by the belt loop and pulled me in the car
And Clyde held a saw'd-off to my head and lit me a big cigar
If you're on the level then we might just be partners on the side
But don't even think about double crossin' Miss Bonnie and Mr. Clyde

Within a week I'd been transformed from a beggar to a wanted man The dreams I'd had of a glamorous life were now, oh so close at hand
Bonnie kept makin' eyes at me, it was hard to look away
She looked like an innocent country girl who had somehow gone astray
Clyde once imagined he was Robin Hood but now his greed was startin' to show
Instead of spreading the wealth around he was Wallerin' in the Dough
And when he started slappin' Bonnie around something went off in me inside, I said
If you keep slappin' Bonnie around, I'm gonna have your hide! Clyde!

Clyde would've shot me then and there if he wasn't so sluggin' drunk
'Bout the time he raised his shootin' iron he passed out on his trunk
Me and Bonnie made our break, in Clyde's Caddilac De Ville
Bonnie was already on my lap as we flew thru Louisville
We got married in Niagra Falls, I got a job as a paper man
Within a week the headlines came, showed Clyde on an old divan
Shot full of holes, the both of them, which the paper then Identified
As the love who led him to his grave, Miss Bonnie and Mr. Clyde

We just couldn't believe we got away with a scheme as big as that
We were buying drinks and tossin' scraps to all the dogs and cats
We rented us a barrel that night at the Whiskey Still
And decided to spend our Honeymoon floatin' down Niagra Hill
We made the maddest wettest bumpiest love fallin' down that waterfall
Like a crazy pair of desert doves who had never seen rain fall
The Police lights were blinkin' at our motel room, outside
But We never went back to hear the tale of Miss Bonnie and Mr. Clyde 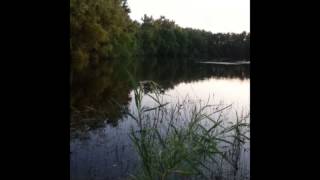