Who would be a poor man, a beggarman, a thief --
if he had a rich man in his hand.
And who would steal the candy
from a laughing baby's mouth
if he could take it from the money man.
Cross-eyed Mary goes jumping in again.
She signs no contract
but she always plays the game.
Dines in Hampstead village
on expense accounted gruel,
and the jack-knife barber drops her off at school.
Laughing in the playground -- gets no kicks from little boys: would rather make it with a letching grey.
Or maybe her attention is drawn by Aqualung,
who watches through the railings as they play.
Cross-eyed Mary finds it hard to get along.
She's a poor man's rich girl
and she'll do it for a song.
She's a rich man stealer
but her favour's good and strong:
She's the Robin Hood of Highgate --
helps the poor man get along. 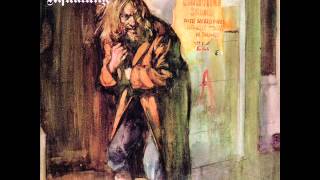