Let's Talk About It Lyrics

Let's Talk About It Lyrics

[Jermaine Dupri (Pharrell Williams)]
Uh huh, oh
Damn baby, shit
How you get all that in them jeans?
Nevermind that, you hear this?
Its that Star Trak
Clipse, (get down!) So So Def

[Verse 1 - Terrar of Clipse, (Pharrell Williams)]
Question, ask any nigga
Rap or a hustler, who rocks is bigger? (The rapper!)
Naw, dog, go figure, with the V12, I make that straight killa
I flood the block, I hug the glock
I have a whole neighborhood that seen a thug to stop (Stop!)
Cause I show 'em what Waco see, then hit the district then visit to Jac-o-b
I like my diamonds colored, watch it smothered (me too)
Show off at the place of jewels, let the white man love it (hahaha)
I'm too much, got bitches out for me
Bring 'em home, give 'em they choice of balcony
She said "We can have more fun", I said "How can we?"
Then she brought her girl in and ate her out for me, wow (Wow!)
All night sexin', just think, this all came from one question

Now as the game rotates, and my chrome gets bigger, More and more girls wanna f*ck this nigga
Its hard for a chick not to stick around
When I come through town, layin my dick down
They can tell a true playa by the clothes that I wear
Game that I spit, and the length of my hair
The more I come, the more I cum, get it?
What you see now, I been done did it
Every girl around, I been done hit it
Cars been kited, since I was sixteen
And yes, I'm still spendin' that Kris Kross creme
Big boy moves, big boy shine, big boy watch tell big boy time (look out)
Everybody know I got the recipe, so you know ya'll niggas can't can't with me
Matter of fact, I don't even gotta say no more, OH

[Verse 3 - Malice of Clipse]
It ain't too many things that exceed my reach
Speedboat, glass floor, let you see underneath
But nevermind that though, I'm just showing off
As I do in the Porshe show with the top lost
I ain't change the game hash, you know the name as,
Malice in my wrist, like shattered stain glass
I generate them Franklin's and Grant's
Each ear look like a halogen lamp
I'm high beamin, at the same time leanin',
In the butter soft seat that keep a street thug scheming'
'for we compare paper, get your weight up
I need more points than that, don't you play with me, Jacob
You see me on my back, you see me live
I'm every color of the spectrum, like ROY G. BIV
Look dog, get a load of how daddy ball
Wanna talk about cash? Well I done said it all 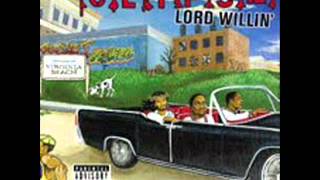