Intro: Jermaine Dupri)
After the party it's the Waffle House
If you ever been here you know what I'm talkin about
Where people don't dance all they do is this
And after the original you know what it is

(Jermaine Dupri)
Remix it had to go down
I got somethin else to tell you 'bout the new Motown
Where people don't visit, they move out here
And ain't no tellin who you might see up in Lennox Square
I don't know about you but I miss the FreakNic
Cause that's where my city use to be real sick
People from other cities use to drive from miles
Just to come to get a taste of this A.T.L style
I'm the M.B.P., Most Ballin-ist Player
Make my own moves, call me the mayor
Monday night you know things change with time
Magic City back lookin like eighty-nine
All the homies on the southside up in the Ritz
Tuesday night, the Velvet Room same shit
Wednesday Strokers I don't go no mo'
Cause they don't know how to treat you when you come through the do'
Thursday night, was Plush but we moved to fuel
And I be up in the booth drunk actin a fool
Friday night, at Kaya they still got love
And the Sharkbar we poppin like it's a night club
Saturday still off the heezy fo' sheezy
You can find me up in One Tweezy
Sunday, gettin me some sleep please!!!
I'm on my way to the Dec to hit Jazzy Tee's, holla!

(FlipBoy)
Aiyyo, i'm from Montreal man, representin' MTL to the fullest!
You can back the f*ck up or you can shut the f*ck up! Holla Back! CMF!

450 to the 514,
To pay for drugs we, we borrow some doh,
Injectin myself with drugs from a needle
4 Fingers Up, 2 Twisted In The Middle (WESTSIDE!!!)
Gangstas walkin' through any hood,
Hoes on the block ain't no f*ckin' good,
Laval City To Montreal City,
If you Montreal City, I wanna hear ya clap

This is Montreal, we not from Quebec,
Unless you wanna mess I got my crew of CMF (CMF!)
Dasem so handsome, Graffin' so random,
Gab that's him, askin' for a ransom,
I giva ya one bro from the Microphone Phantom,
I'm singin' on the streets my CMF Anthem (Worddd)
We fresssh, we got all 4 season,
Winter, Spring, Autumn & Summer,
Watchin' all them pimps drivin' around in their Hummers,
we also play, all for sports,
Hockey, Football, Baseball & Basketball
So Peace out y'all! I'm From Montreal!

(P. Diddy)
Welcome to New York motherf*ckers where we don't play
And out of towners get got like everyday
And a gangsta's a gangsta in every way
Sittin on twenty-two's, that's what long money do
Now the Don's on it, Diddy shine on it
Tell Flex to run it back and drop a bomb on it
Sunday we layin low in Halo, sippin Cris' and we straight
Monday we go to Bungalo Eight
Tuesday I'm in spa drunk doin the shake
And for the rest of the week we just follow the freaks
You can spot us out of town by the way that we walk The way that we talk, cocky the state of New York
Hot now, top down at the Rucker game
New coupe, no roof, playa what's my name?
Now Brooklyn, Queens, Manhattan, Staten
Uptown, what now?! Let's make it happen

(Murphy Lee)
Who say St. Louis ain't hip-hop? Dirty we hop to what's hip
I'm a lunatic with too much grip to let her slip
I'm so St. Louis, ask my tatooist
I was like "The Waterboy," now they sayin, "You can do it!"
I'm Baby Huy, one of the best in the Louis
Sip Louie smoke louie, dressed in Louis
Home of back porches, Chucks and Air Forces
Old school cars be trailblazin like Portland
The girls are the best like Travis with fat asses
I call 'em gimme girls they always tell me I can have it
All got habits, marijuana ecstatic
Buy two cats and coats with automatics
St. Louis is the +Truth+ like +Sojourner+
Don't need a burna we learn from Ike Turner
I tried to told ya don't cross that bridge
Without permission from them St. Lunatics

(Jermaine Dupri)
Yo-yo-yo
Ladies and gentlemen, we got the big Snoop Dogg in the house tonight
He just came from off tour
And he wanna tell y'all little bit about where he come from

(Snoop Dogg)
Palm trees, bad bitches and wannabeez
O.G.'s like me eatin on polyseeds
Now & Laters, jellybeans, and wallabees
Real niggaz from the set I hardly ever seen
Mostly heard, sell a bird off the cizzurb
And when we dip, we hop and then we swizzerve
A lot of homies like to wear the pizzerm
Hair longer than hers, sharp with the fizzur
Doggy dizzog you know I like 'em dizzog
Like Kobe to Shaq, so take that
(Jermaine Dupri: Take that, take that)
Long Beach is on the motherf*ckin map
The city by the sea, R.I.P.
J.D., you know about the L.B.C.
My niggaz love the stellas, cold-hearted killers
Real cap pealers, real niggaz feel us
Ain't no squealers, a lot of dope dealers
Bang diggy dang dang dogg pound gangsta crip gang
Yeah we do the damn thang
Home of coroners, scoop, buck, cocaine
Head to the church house to get a little workout
Smoke out, drink up, now put ya bank up
It's all on me I got a scenery to stank up
Crank up the beat, raise up the heat
I'm thrownin a block party on two one streets, fo' sho

(Ludacris)
Welcome to Atlanta where the players play
And we ride on dem thangs like every day
Big beats, hit streets, see gangsters roamin
And parties dont stop 'til eight in the mo'nin

(Ludacris)
Welcome to Atlanta where the players play
And we ride on dem thangs like every day
Big beats, hit streets, see gangsters roamin
And parties dont stop 'til eight in the morning
Explain lyrics
Correct lyrics 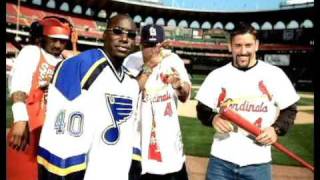