Every day I'm tryna be a better me
One feet in the door the other feet still in the streets
Without my daily drugs it make it hard for me to eat
Without my f*cking rod it's hard for me to sleep
Why since I done came up they lookin' at me different?
But I won't never change up, that shit just ain't my business
Swear I hate being famous, I'd rather be in the trenches
Tell me how the f*ck they blame us, we gotta go and get it
I ain't beefing with no nigga if that shit ain't 'bout a penny
How the f*ck you end up missing but the main one say you was with me
f*ck them niggas who turned witness, the judge handing niggas fifty
Jim 'nem got hit with twenty, my time could be any minute
That shit ridiculous, that's why I be chilling
But willing to show you that I ain't pretending
Only spit facts, all that other shit whack
Yeah I hear how they say I don't rap what I'm living
Well listen to that, run up, get your shit cracked
I'ma take off your hat and just leave your shit missing
I'ma really up, I be finessing packs
I might shoot out of town and blow bags out in Lenox
Got tears in my eyes, my pain they don't feel it
No I ain't gon' lie, right now I'm in my feelings
I love all my guys, two times this shit I'm living Everything on the line so I can't get caught slipping
Was raised up in the South so you know I be throwing fours
I don't give a f*ck 'bout no bitch, all I care 'bout is my bros
No I never did have shit, all I dreamed of was to glow
I swear y'all what made me sick
Why speak on the shit if you don't really know?
Sometimes I be mad as a bitch
What they don't see kill me the most
Jump in my way and get hit with the stick
Bet I won't miss when I up with the pole
Look at my neck, check out how it glist'
Try to take this and I'm snatching your soul
Almost got hit tryna rob a lick
Should've blew off his shit but the rest would've told
When I was young daddy gone on the joes
Uncles and cousins work over a stove
Don't f*ck with niggas, they act just like hoes
Shout out to the OG's that gave me the ropes
Stop playing lil bitch, 'fore your ass get exposed
I done been hurt, it won't happen no more
Show after show, just did one on the coast
Just poured up a deuce, next time its a four
I'm stuck in the game, I'm just tryna make it out
Please stay in your lane, don't wanna take you out
Free my brother Chapo, they just put him on lockdown
I know some real steppers who won't make a sound

Real steppers who won't make a sound, yeah yeah
I know some real steppers ready to lay you down, yeah
When you talkin' 'bout this it make me jack you out your pound, yeah
Niggas be talking shit, what happened when he slapped you around?
Haha, but we ain't gon' speak on that though 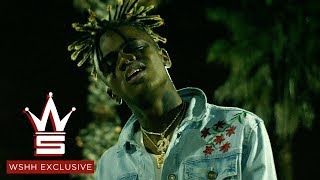