[Jadakiss]
Yeah, yo, I'm the nigga with the perpetual oyster bars
Mother of pearl delivery, voice of God
And...it's hard just being the boss
Being I can't go to jail cause them years'll cost me
Don't get me wrong, lay a nigga down if he force me
Rather just sit back and roll a dutch
Think how I'ma put the game in the cobra clutch
Think about how I'ma get the 'caine over Customs
Never underestimate niggaz, or over trust them
Uh...yeah them M's is right in my face
I just gotta throw my Timbs on and tighten my lace
If it don't jam, the Tech will spray
When I spit everybody gotta split like pepper spray
Cause I'm a nigga that hate to settle
I'm a man of the Lord but I still can't escape the devil
Moved away and still can't escape the ghetto, what

[Chorus: Nate Dogg]
The time to talk is up
So bring the heat, that time is over
While you running your mouth I'm creeping up over your shoulder
A gun, a knife, a bat, a brick, anything I can get my hands on
Call my bluff, start acting up, and I'll leave you underground

[Jadakiss]
I know how to get my pairs off me
They can cry and die from high blood pressure cause tears are salty
It's a symptom if you bobbin your head
Know that he's sick, know the flow is ridic', now throw him a grip
When I get it, you already know I'm throwin them bricks Puttin purple everywhere, daddy, I'm throwin them nicks
That's right, homey, you can't move me
I ain't goin nowhere, I'm in the hood like bootleg movies
All you shootin is the breeze, a bootleg uzi
I'm just waitin on a que like Suzie, don't lose me
These penitentiary chances that I take
Should be able to get the mansion by the lake
But I invest my bread into something else
Into something else that'll make something melt
You just gotta feel the kid
if not rap for the fact of how real he is, whatever

[Jadakiss]
Aiyo, niggaz know the champ is in here
He took it from crack to rap, now he put out two anthems a year
And I just wanna rock for a century
Then chase the book with the documentary
If you, can't do nothin other than flow
Life's a bitch like the mother from +Blow+, let's go
Don't make me put your heart in your lap
f*ck ridin the beat, nigga, I parallel park on the track
Hop out lookin crispy, fresh and new
In the six, but it's a BM, and it's Pepsi blue
And, I don't know you.
But I know a man becomes a man from all the shit that he go through
Ya'll ain't f*ckin with Jason
After I cash in, there's really no justification
Of how I'm gonna change the game, so don't get outta line
Cause this little nine will change your frame, what up 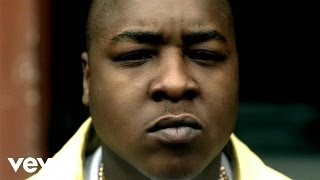