At the brink of Hell an island swims in lakes of fire by the darkened plains
Deserted and dead it declares its place
By spewing it's magma like blood from its veins and covering the island
In a black, poisonous haze

This was the first spot where the angel Lucifer set his foot
And claimed and declared this view as his home
He came from the north, and alone was he not
But joined by the followers from the roads he had roamed

Here he set his haven. Here where angels die
Here he baptise the newcomers in fire. On the Devil's own Sinai.

(Female)
"Sinai roars as your frail brittle bones viciously torn, mutilated and scorched.
Bleeding lava pulsating like blood, 'neath your skin as it withers and burns"

Still the damned gather here to hail
Amidst burning smoke beneath black skies
Hellhounds bark at the northern pale view...
This is the common abyss for all alike
Where the red, melted stone fl ow a scorching river
Into the day in north, and in south: the night.

And here (Here you are) on the outstretching fields (On Elysium grounds)
Far away (Far away from life). God (God) is out of reach

Here they sacrifice the captured saints .
Here is where the torture awaits
Here is where you abandon your faith.
On the Devil's own Sinai...

They wait and wail in ghastly pain
While digging deep inside, insane.
Inflict a wound you heal in vain
As blood pours black from pierced veins
They crush and cut, the dark stone stained
A ribcage opens, a hole that frames
A soul unstained and struggling sane
Beneath the burning rain :/

...cast into the fields of evil pleasure.

It's always been there, and forever it will
Stay untouched by the tooth of time
Standing with majestic intimidation
Bat-winged creatures surrounding its peak,
High above Hell they all fly
Forever screaming in demonic celebration 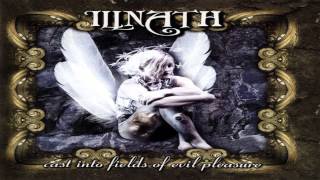 check amazon for Cast Into Fields Of Evil Pleasure mp3 download
browse other artists under I:I2I3