[Verse 1]
I-20's in the building, set it off and get it cracking
I got something in the truck, to get the crunk and
start the action
Keep 'em popping, I'm a pop it, where ya crews at?
(crews at?)
Oh yeah you riding clean but nigga where ya shoes at?
(shoes at?)
I said I put this on my momma, ain't no hoe in me nigga
I keep it loaded just for drama, let it go in you nigga
And I ain't scared of none of y'all, talking gums with
you white
Yeah you packin', but you actin', shootin' nothing but
dices
Now, who the realest down south?, spittin game with
that speech
These niggaz recognize my face and keep they name on
the street
Oh you been waitin', you been hatin', you can't breathe
now (breathe now)
Shit, we been cookin for a while, its time to eat now
(eat now)
You tell these ballin' muthaf*ckas that I'm blocking
they dreams
I'm top five, dead or alive off one sixteen
And this twenty talking to you nigga neva forget
And since y'all a bunch of pussies, you about to get
wet, bet

[Verse 2]
It ain't easy, but I do it like its nothing to me
Now everybody talking greasy but they frontin' to me
Oh yeah you down to move a pound, where ya weight at
(weight at)
I got a deal just off a verse and niggaz hate that
(hate that)
After the show, pull ya hoe, make her leave with the
clique
Disrespect, cause an effect of pimpin' a trick
While you was on her, you was hoping, we would fold up
and quit
We on tour, pullin whores every city wit hit Then that yak get the flowin', DJ play the record
If you know you ain't swaggin, time to head for the
exit
Cuz I'm fiendin' for the top, I can taste that (taste
that)
I know you down to cut me shawty, where that face at?
(face at?)
Don't ever play the dealer, nigga try and get smoked
My niggaz chop a brick in half and call that shit diet
coke
And it's the hardest shit going, nigga leave it ain't
that
I-20s in this bitch, and that shit is a wrap, Lets Go

[Verse 3]
Its time to dig into ya chest, I been waiting for a
minute
Know you heard about my vest, you can't wait to get up
in it
If ya girl is into singing then its no prob (no prob)
But I don't care if she can blow, I want a blow job
(blow job)
Push the seat way back, while a pimp ride slow
With a short dog 'Lac, gone off Hydro
Playboy 2-0, shoot a grand on a stripper
And she down to f*ck us all, and give a damn if we tip
her
Cuz this the big league and you all street shooters
And ya shoots going go, so the heat's going through ya
If you ain't down to make a stand, you get laid down
(laid down)
That just the way these niggaz livin gin the A-Town (A-
Town)
Throw ya side up high, let the people know you repping
Any zone, any hood, any block, any section (come on)
I'm the streets first choice, when its come to who's
realest
Eastside, A-Town, I-Dub, you feel it 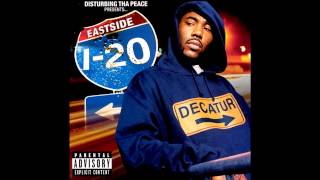