Turk:
Two of the hottest days of the week
They harrassin' and hackin' niggaz in that UPT
N.O.P.D. be rollin' so deep
They be f*ckin' over niggaz
Kickin' in doors
Sometimes, they be pullin' triggers
Ya hustlin? Better chill out
'cause they not for jokin
Making sure they close shop
All day, they gon' be smoking
So I advise you just to stay inside
If they catch you down back, for sure you takin' that ride
Downtown, rilla
Where niggaz doin' time, be waitin'
Better be bout your issues
For your ass they gon' be chasin'
And every man for they self in that pen
So if ya all in nigga, ya all in
For help, ain't there nigga, ain't no callin'
So if ya got a chance run when ya hear that siren
Tuesday and Thursdays, they gon' be ridin'
Stay ducked off 'cause it's safer when ya hidin'
And they don't give a f*ck what shape and sizin'
lock you down prison rate steady risin'

Lil Wayne:
Shit, nigga betta hop, skip, and jump on the block
On Tuesdays and Thursdays better run from the block
Stay there if you want and get ???
Ya on them white boys and get hung from a ???
Look, look, look, look, look
Nigga betta run
If u got some ???
Lookin' for some freedom find that you will get none
And damn I ain't even much see my P.O. last month
I'ma play the hotel
I missed my court date I ain't tryin' to end up in jail
I'ma put up some mail in case I have to make bail
I'ma still rhyme swell
Shiiit, might as well
And stay from the block 'cause it be hotter then hell
I'ma tell ya now, they don't give a damn about ya
End up in that place and toy around and be forgotten
They rotten like a whole apple off a forbidden tree
On Tuesdays and Thursdays you won't find me

Juvenile:
ATF be showin' they ass around my block
Feds get all the respect 'cause they'll close up shop
Who do you think be pushin' them birds up in the hood?
Who do you think be dumpin' them bodies up in the wood?
It's something like baseball, three strikes and you're out
Violate your probation, 2 and a half on 5 My pride, don't want me to be up in this place
My pride, don't wnat the Lord to notice my face
A young nigga with golds behind tens on dubs
In the paper license plates they gon' think I'm a thug
They gon' tear this motherf*cker up lookin' for drugs
And make them dogs break me off trying to get me to talk
You wouldn't believe the shit with the police I done been through
I done seen some shit they did to people I'm kin to
My friends too
That's why I be chillin' ya heard me?
Up in my f*ckin' residence on Tuesdays and Thursdays

B.G.:
Certain days lil B.Geezy hit the block and hang
2 days out the week I lay low 'cause them people gon' swang (swing)
I ain't bout gettin hack
Juvey, that ain't my thang (thing)
Police ridin' my back
Scoping out my rang (ring)
I play it smart I ain't stupid I know when to leave the block
I know how to peep the scene
I know when it's hot
Oh them jump Hot Boy$ they'll take your loot
Tuesdays and Thursdays them big white boys have a nigga spooked
They be 3 deep, creepin'
Comin' 'round the corner, peepin
They sweepin'
But they ain't gonna catch me slippin', I'm rollin' out
I'm gon' chill by a bitch and cool out on the couch
Smoke blunt after blunt till I pass out
When it get dark and cool off then I'ma smash out
I respect the task force they don't give a f*ck
For anything they'll have ya in central lock up
On Tuesdays and Thursdays

(Talking)
Manny Fresh: Whoa, now there u have it. Tuesdays and Thursdays
(off the heezy). The whole task force for yo' ass
(nigga just givin' ya some game, ya dig?) For sho'
Baby: Them white folks don't wanna see a nigga ballin',
wanna see us crawl bruh.
Manny: For sho', lookee here.
On Mondays, you can run all day
On Tuesdays, sit ya ass down (duck out playboy)
On Wednesdays, you can slang all day
On Thursdays, sit ya ass back down (off top!)
On Fridays, you can f*ck all day
On Saturdays and Sundays, you cool boy, believe that
Baby: You can take this for what it's worth playboy. And don't use ya brain
and take heed to what CMB be saying. f*ck around and be in that cage like a
ole' dog. Treatin' a nigga like a puppet. Takin' orders like a bitch. But a
nigga gotta use that game and stay up and try to stay rich man.
Explain lyrics
Correct lyrics 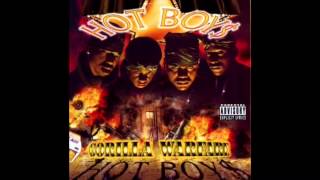