nelson algren came to paddy at some party at the dead end alley. he told him what to celebrate.
and i met william butler yeats. sunday nite dance party summer 1988. at first i thought it might be william blake.

we mix our own mythologies. we push them out through pa systems. we dictate our doxologies and try to get sleeping kids to sit up and listen. i'm not saying we could save you. but we could put you in a place where you could save yrself. if you don't get born again at least you'll get high as hell.

sweet saint paul. that must be the hardest luck saint of them all. we met him in some suburban saint paul mall.
when st. theresa came to holly. i wasn't even at that party. i'd already moved out to new york city. when judas went up and kissed him. i almost got sick. i guess i knew what was coming. i guess i knew it was coming. we gather our gospels from gossip and bar talk then declare them the truth. we salvage our sermons from message boards and scene reports. we come on to the youth. we try out new testements on the guys sitting next to us in the bars with the bars in their windows. even if you don't get converted tonite you must admit that the band's pretty tight. 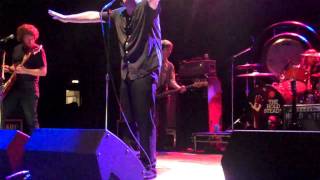