He's trying to act in the dark up in penatration park.
He says he's got your medication.
She was sitting on the edges of his vision trying to start a revolution.
He's done with all the parties, he's covered in contusions.
You laugh these laugh lines, you love these bright bruises.
She said she was cruising, but she came back all flat and out of focus in a cool car, cranking Krokus.

He was dreadlocked in the dorms at the Colorado Corn, He says he's got your vegetation.
And she was sitting on the edge of the bed smoking, trying to reach emancipation. And he's done with DVDs, he's fully-entertained.
He's bleaching out the bloodstains, he's got diamonds in the drain.
She said she was coming, but she mostly just made hard, fast noises. It kind of sounded like The Locust.

It was song number 3 on John's last CD. Gonna make it through this year if it kills me, and it almost killed me.
It was song number 4 on that first D4. You want the scars but you don't want the war. That's just hardcore. These kids are clever to the core. 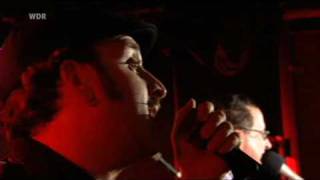