On The Dance Floor Lyrics

On The Dance Floor Lyrics

[Heavy D]
Get up and cup your feet, the beat has just been played
I know you like what you're hearin cause you look
amazed
The reason for the matter that you're standin there
gazin
The record is for you and Heavy D is, amazing
Truthfully speaking, I am treating
you to a sound you've [?] been needing
Combined with the funk full power of beat
Originated situated, by MC Heavy D, yah!

[Heavy D]
Motivation is the thought that we put behind
this musical scratch, combined with rhyme
So that you can enjoy, and employ
yo' feet to the beat of a man, not a boy
Adjust yourself, get a musical grip
Exciting lyric writing, I know it can hit
It's too hard to resist, a beat like this
Don't fight it, just like it, cause you can't miss
From the tune I assume, that you will soon
be filled with the skill, that's around the room
Cause I am presenting, my rapping skill
So you can dance to my beat, and dance you WILL!

[Interlude]
AIYYY! ... [2X]
On the, dance floor now hit me!
[Heavy D]
An introduction is deserved to show you where we stand
Heavy D & the Boyz, the dance floor band
The crew with the juice, rock and we produce
No stoppin when we're droppin when we start to get
loose
Outrageous and famous, cash obtainers
Schooler of the beat and tough guy tamer
Speech comin from the Overweighter Dominator
Rough and tough I'll sink a perpetrator
With my crew by my side, G-Wiz and T-Roy
In the booth is Eddie F, they unite THE BOYZ!
I'm hurtin and I'm workin, non-believers dispersin
The Overweight Lover, and I will cold hurt
and if any folks negative toward me
Not despisin but I'm risin over duck emcees
Cause I will take 'em, make 'em, reshape 'em
Bring 'em to the crib, study hard then make 'em
better than they were or ev-er, could be
Now they're a perfect product, by emcee Heavy D
Cause I got the truth and a whole lot more
Don't be sad that I was back on the, dance floor
YAHHH!

[Outro]
Aiyyo DJ Eddie F, I made up this BRAND new stomp down
dance
It's called the Heavy D shake, you wanna see how it go?
Check this out 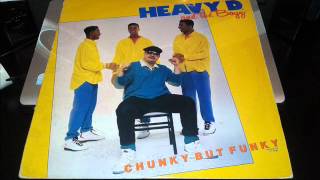 check amazon for On The Dance Floor mp3 download
these lyrics are submitted by kaan
browse other artists under H:H2H3H4H5
Songwriter(s): Dwight Myers, Teddy Riley