[DJ Premier scratching]
"I want the public to know.. what goes on"
"I mean, look at the situation - be real"

[Verse One: Guru]
The names have been changed to protect the innocent
Each step is intricate, I rep magnificent
Knew this kid named Ronnie, used to make cash with Caesar
They made a lot of money back in the 80's crack fever
Caesar was an overachiever, a kingpin and 18-and-a-half
He got knocked and left Ronnie to watch the team and the stash
Plus his crib, his jewels, his whip and his girl
And Ronnie's self-interests had him livin in a different world
He rocked Caesar's chains, he put Caesar's rings
Smokin mad wools all day, with Caesar's change
Not to mention he pushed up on Caesar's wifey
A move like that my man, extremely sheisty
It all got back to Caesar in the bing
They found Ronnie's body in the playground by the swings
Anyone can get it, for sure it don't matter dawg
Especially when a nigga tries commitin sabotage

[Verse Two: Guru] Treachery, deception, it's best to keep a weapon
When you think that they be breddern, they underhand your plan
It's over for the cowardly, we grow more potent hourly
I'm knowin where the power be, I'm schemin to get even
Dissension can occur from within one's ranks
The chain can be weakened, by just one link
Pricks be galavantin from one crew to the next
Musical click-ass niggaz catch two to the chest
My usual guess is that they chose to digress
Disillusioned by greed, causin you to distress
Just do what's best, clean house, leave out
Them punks can't touch what they can't peep out
See I'm a raw nigga, and like my pops I'm a lawgiver
Can't throw a wrench in my game, I'm a boss figure
Take you under my wing, it don't matter God
Dead you if you try to commit, sabotage
Rise for me now, kneel for me now
Time to pass judgment, can't feel for you now
Lay in your bed, accept your fate
Try to clean it up, except you're late
From the streets to the industry, peep the chemistry
It's GangStarr shit, makin a livin see
We put it on and when it's war it's war
Sabotage'll have me dumpin the four {*gunshots richochet*} 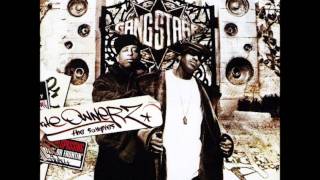