Riot act, this is where we really prepare
Riot act, out here we show no fear
RIOT ACT, time to protect our communities
Riot act, real criminals get immunity
RIOT ACT, eye for an eye - so yo who want it?
RIOT ACT, rushin all you cowards who fronted
Riot act, let's bring the power to the people
RIOT ACT, no justice then we gotta come see you

[Verse One: Guru]
Just like a thunderous gun clap, you wonder who done that
Put you under with one rap, me and the brothers have come back
We'll lash you for tryin that, we know you been lyin cat
So now you be lyin flat, we'll read you the riot act
Whassup you little f*ck, get your life right
Cause there's too much goin in the world, and shit ain't quite right
See you're just addin to the problem
Young gun, high-strung, ready to trey-eight revolve 'em
Knot nearly in your waist, you step up in the place
Catch one off guard, he lookin silly in the face
But hear they come with the M-16's
They got teargas, helmets and clubs - knahmean?
It's martial law in these streets
It's like Afghanistan man, it's gettin raw in the streets
Still you demand your rights, I understand your plight
But do the knowledge if you plan to fight

[Verse Two: Guru]
So realize what it is to be oppressed and afflicted
Subjected to sick shit, knowin others live different
f*ck THAT, the streets about to blow again
They forgot, so we gotta let 'em know again
Huh, we'll blast you for tryin that, we know you been lyin cat So now you be lyin flat, we'll read you the riot act
Soldiers, let's show these cowards what's up
The hood ain't goin for it, let's get ours, that's what's up
Be sure to keep a balance to your fight
And do the math, figure how to use your talents in a fight
Ain't nuttin worse than a rebel without a cause
Ain't nuttin worse than a people without laws
200 million square miles under attack
Reperations for us blacks, hell yeah, they need to come with that
Who's gonna take the weight, and erase the hate
All I know is when we come through, better make some space

[Verse Three: Guru]
A lot of people ain't happy you can tell by their ways
It's growin tense okay, I can smell it today
Tenement buildings house the next killers
While rich diplomats, are purchasin their next villas
But for the scrilla and power, uhh
They'll send some killers to their hood, that are iller than ours
Still niggaz settle beef, with the metal piece
And every block stays hot, like the devil's feet
Incarceration of the mind, police brutality and poverty
These are realities of mankind
And we can't win nigga, if we keep shuckin and jivin
In a minute, they gon' have us duckin and divin
They got bullets for us {*automatic fire*} yeah, uh-huh
They got jail cells and graveyards, they the bullies, not us
We'll blast you for tryin that, we know you been lyin cat
So now you be lyin flat, cause this is the riot act 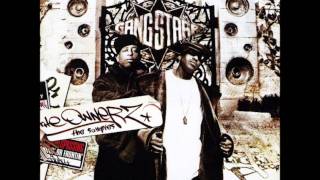