[Jim Jones Intro]
Uh huh... Jones, Dipset... Byrdgang, bitch
You know what it is
When you see me two twelvin you homie
You bitch niggaz keep triple ninin, have some integrity, bitch

[Jim Jones]
BALLLLLIN'
Peace blood, peace almighty
We all thugs and we run the streets nightly
And get my lawyer, why? Cause I ain't coppin' out
And I f*ck wit b-boys who bring them choppers out
One shot of that will have the boys bring the coppers out
And we ballin, for all the toys is what we hoppin out
My feary side, where we ride
And we all fly high in the Leer G5's
So, twist ya fingers up and bang, muf*cka bang!
Get ya money up, this cane is what we f*ckin slang!
And a 9 trey is what I f*ckin' claim!
It's Dipset Capo the Don of the Byrdgang!

[Snoop Dogg]
They call the D-O-Dub... wasn't really trippin cause
21, 20 crips and all of us is crippin, cuz
We from a different street, all got that different heat
But when we move the macs for Game, we on the same beat
So if you f*ck with blood, then you f*ck wit us
And we ain't bustin duds, watch out, cause we bustin slugs
We sure to stay in touch and clean your mess up
And if you from the West Coast, my nigga... w-w-w-w-WESTSIDE!

[Nas]
Game got at me about the remix, its an honor my nigga
I made rap, one blood, that say I'm signin wit Jigga
I got rappers gettin mad at me
I got these new jack rappers tryin to clap at me
I got these corny wannabe, diss-song kings on the radio
Talkin bout how they gon spray, and take me away
But I'm the true living, legend, I'm not to be questioned
Have your whole hood holler shit about my progression

[T.I.]
You knowin my attitude shitty, only a buck fifty
So I keep the smitty's wit me, shit, how many wit me?
What, you scared? I'm prepared, in the MALL AND ALL!
Wit two two's, you can call me QUICK DRAW McGRAW!
Bitch, I'ma cut that fool, better CALL THE LAW!
I start sprayin, make f*ck nigga FALL AND CRAWL!
I press play like Puff, no PAUSE AT ALL!
Choppin holes in ALL THE WALLS, that's ALL THEY SAW!

[The Game]
Hip-Hop ain't dead, it just took a couple shots
I bring it back to life, give it a couple shots
The kings comin, no, I'm not Jay-Z
Too many niggaz hate me, but they scared to face me
This ain't a movie dog, no, not Waist Deep
I'm not an actor, but I'll show your bitch Big Meek
She givin one blood, one love, on dubs
140 thousand the first week... UHHH!

[Fat Joe]
All these niggaz wanna front trill with them stiff faces
Till them niggaz lyin still up in stiff cases
Within styrofome... and embalmin fluid
I been gone too long and I'm down to lose it
Somebody go and get this nigga a pint box
And I ain't just talkin about a measly nine shots
Yeah I'm chopper happy and my wrist loose
Call me Goldie, I'll smack your bitch too!

[Lil' Wayne]
504 gangsta, New Orleans soldier
Bangin underwater, f*ck around and soak ya
Louisiana gunner, I'm bout my holster
And if you gettin greasy, I'm an ulcer
I'm bickin back, bein bool on the Eastside
Or New Orleans where the bloods at the bee hive
Ain't nothin sweet unless its presidential
Cause that is where I sleep, now give me my key!

[N.O.R.E.]
New York get the blood money, dirty cash - still sweet
We will black wall street by the swapmeet with heat
Def Jam, they gonna flop him and Reggaeton ain't hot in
The building no more... It's OKAY! I GET IT POPPIN!
Back to the forest trees for deep, these little me's
Who took believers an opportunity to breathe
And you ain't gotta go overseas to see our rap shit
You can come to left, round Queens and get jacked quick

[Jadakiss & Styles P]
(One blood) we used to the spillin
(Came from the hood) so we used to the killin
Used to the black males (makin cracksales in the buildin)
(How else you get the benz) with the suede on the ceiling?
(Blood in) blood out (me and homie) back to back
(Both loaded workin) we about to pitch a (shut out)
I'm New York's king, (I'm New York's hardest nigga)
Anything in between's a (motherf*ckin' target, nigga)
D-B-(L-O-)C-K, (he spray)
The hawk'll find a nice home (right where your cheeks stay)
We got a mean team, (Hip-Hop dream team)
Them boys is only in the projects on (green screen)
Yeah, no security, (I'll put you on the respirator)
I'm the bomb, (I'm the mothaf*ckin detonator)
One (dutch), one (bud), one (burner), one (slug)
Want a couple casualties, but we'll settle for just (one blood)

[Fabolous]
WHAT IT LOOK LIKE? All I say at most
Shooters waitin on the word... JUST SAY IT LOS!
I let these niggaz live, yes, I saw 'em pull the plug
Havin goons pullin gloves, leave the room full of slugs
Catch me trafficin, on maroon colored dubs
Couple Africans, with balloons full of drugs
If they like me, tell 'em line up
While I sit behind team, point 'em out like a line up

[Juelz Santana]
Mic check, one two, one two, check
I'm strapped, you strapped, let's play two on two
Let's go, you're eyein us in the iron bus, BOOM!
Leak ya, two liters of red juice, hawaiian punch
So what you boys gon do to me? I'm born street
Your life's sweet, MTV's Laguna Beach (damn!)
Mama told me not to play with fire but
She never told me I would grow to be a liar

[Rick Ross]
One love to the gangs, but I'm in the thangs
Save the colors for the cars, see we kill for the fame (Ross)
The boss made it, yeah, we floss flagrant
Shame how I lost your life savings up in Las Vegas (Ross)
I'm a heavy better, I'm a heavy seller Keep white in the office call it Jerry Heller
Lettin off a hundred rounds, let the barrel pick
And we gon sit here, wait for the derrelics

[Daz Dillinger]
Draped in blue, notorious gangsta crew
RIP for niggaz who don't stay true
Deep down in the crevices, see the jets veteran
Dwellin in the land of the gang bang with fleshin
I'm legendary, yes, yes, a westcoaster
Throwin up two C's, wit two guns in my holster
I'm from Long Beach city, a crip next to Compton
Down wit my nigga Game, if you niggaz want problems
From the streets to the suites, anywhere we can meet
?? to Compton, Slauson Swap Meet
Worldwide, get swept away by the tide
By G's, and BG's, O.G's, its time to RIIIIDE!

[WC]
Who the rider, looter through the gutter mayne?
Trued up in them Carolina blue Hurricanes!
From the westside, strivin to dead em
Where them killers throw that third letter up
Like Raymond Washington and Tookie Williams
Blue jeans, blue strings, blowin blueberry green
Cadillac on blue D's and a blue T
Money thick as blue cheese, chunkin up the dub
What the west be without Snoop and Dub C and one blood?

[E-40]
The Bay Area, f*ckers, we pop em
Open you up if you got a problem
Up top, born in Cali-forn-ia
Clean your clock, open your can of tuna
Make a choice to see the hell or it's heaven
Get your chest layed out wit the FM 57
This ain't nothin to do with nobody
But in the Yay, there ain't nuttin to do but catch bodies

[Bun B]
I'm comin straight outta PAT, like Compton in all black
But when we say what it do, they never say holla back
Bun B, the uh, OG like '95 Air Max
Neon green outta fight club off a fair facts
Ask the hundreds, it's doable, I done done it
At the summit of rap and I'm watchin you haters plummit
Run to it or run from it, to Bun it don't differ
Wipe the streets with ya like you a swiffer as a gifter, one blood!

[Chamillionaire]
I'm the realest youngster thats breathin, and I don't gotta give a reason
Chamillionaire a millionaire, y'all competin to be competin!
My purpose is to get the cheese and as a purpose that should defeatin
So shut your mouth, have a seat and be quiet till I finish eatin
My label tells me I'm greedy, hoggin all the room on your tv
Like (Eric) they think its (Eazy), but it isnt easy believe me
Need to make a room in B.E. television if you wanna be me
Game said he made room for Jeezy, I had to make room for me, G!

[Slim Thug]
Its one blood if you blood or cuz
From that number one thug, its still one love
I rep my blue boy team but I do it for green
I do it for my folks, vice lords and kings
All us trappers, future rappers, standin out on the blocks
Tryna get up out the hood mayne, and stack 'em a knot
Put ya sets in the air, scream f*ck the cops!
We gon rep for the hood mayne, like it or not!

[Young Dro]
My feed mashable, murders are catastrophical
Cars is improbable, I'm overcomin obstacles
Trappin, I made it logical, my topic is impossible
I got a partner named Shoe Strang, cause shorty real crossable
Shark meat to Papadough's, cars be tropical
All guns choppable, all blocks are mobbable
I am unstoppable, my calico is toxable
Lyrically diabolical, cushion is not ??

[The Clipse]
Red rum, red rum (such power in the tongue)
Never in the wildest, (was he talkin to them)
Style on niggaz, (but feel it to the numb)
Japanese thread, (brought flavor to these bums)
Consider me the savior, (look what the lord gave ya)
My celebrated presence (like the return of Rayful)
Frolic in the snow, so playful
(And revivin the track) like we flowin through jumper cables
(What duo) you know (get XXL kudos) while coppin off Coolio
(Classic shit) we mastered this, (left for dead) I'm back, (I'm Lazareth)

[Ja Rule]
Shit, one trip, one blood, LA, New York
The Game, the Rule, one love, guns up
Hands down, can't touch, the flow is a bit much
The style, wanna keep up? I advise you to speed up
With money movin like coke, these days gotta re-up
G up, cop some heaters and dare a nigga to act up
You see us, in dual seaters and throw it up!
Its all hood, niggaz rep your sets if your cuz or (blood)
...Niggaz, we all bleed! These niggaz can't breathe
Only because the guns are drawn and aimed to part
Niggaz that got bullets with names on them!
Want em, come get 'em niggaz, y'all know where to get at me
Look at me, now pass me, maybe you can be half me
You bastards, I'm laughin, bullets stickin in family
Who sadly gets torn between one crip and one (blood)
Y'all niggaz know me, haha... yeah! 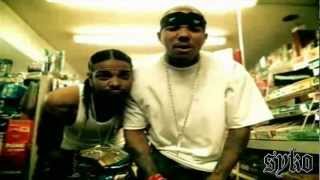