"93.5 K-DAY, givin you the taste of good life, your girl Yo-Yo.
Should I say is it still all good?
Today at 12:45 outside the Petersen Museum here in Los Angeles,
Notorious B.I.G. was gunned down and pronouced dead at 1:15 this morning.
As a result of the ongoing feud between East and West coast,
the tragic death of Tupac Shakur who was gunned down in Las Vegas
just six months earlier, our prayers go out to the families."

"Westside Radio, Julio G.
A sad day today for the West coast; we lost an icon y'all.
Eric 'Eazy-E' Wright, passed away today at 6:45 PM,
Cedars Sinai Hospital, due to complications from AIDS.
A definite West coast legend, brought you N.W.A.,
brought you Michel'le, brought you D.O.C., and the list goes on.
We definitely gon' miss you Eazy."

[The Game - impersonating 2Pac]
Picture me rollin in that black B-M-dub, headed to the club
Fresh out the Tyson fight, Beamer all rimmed up
Shinin with the big homie, five-car caravan
Ridin shotgun, put that chronic smoke in the air
"Me Against the World" is what I told my foes
So it's me against the world, 'til they poke them hoes
Leanin out the window, flickin ashes off the indo
Throwin up Westside, I see, some of my kinfolk
Pull that blunt closer to my mouth cause only she know
I'm feelin bad about that nigga we stomped out in that casino
But f*ck it it's Death Row - the big homie never told me
that my next blow could be my f*ckin death blow
Tell Kidada I'm not ready, I ain't even let my momma know
I ain't got no kids, I'm only twenty-fo'
Before I can let the smoke out, niggaz let twenty go
The thirteen that hit the car was through the passenger do'
Now come wit it

[The Game - impersonating Notorious B.I.G.]
I love it when they call me Big Popp-a
I only smoke blunts if they roll prop-a
Look I gots ta, catch the first thing smokin in Cali
And hit one of my bitches in the valley
Gotta call my nigga Sean, tell him reserve the don
Tell him to get the chron' and the teflon
I think they trippin off the homie gettin shot
But God bless his soul, Lord know it wasn't Pop
or the M.A.F.I.A., Kim tell Cease get the f*ckin truck
We 'bout to hit the Wilshire district, get f*cked up
Pop mad bottles son, twist up the Phillies
I'm thinkin 'bout T'yanna, these niggaz is lookin silly
If this was Blook-lyn I would up the 9-milli
But f*ck it we to the truck, roll the dutch, we out of Phillies
Hop in the front seat, of that dark green Suburban
Heard another car swervin, gunshots close the curtains; Biggie!

[The Game - impersonating Eazy-E]
Layin in this hospital bed with bronchitis, I can't talk
Walked myself in and all of a sudden I can't walk
IV's in my arm, my wife Tomica at my legs
(Ruthless), I mean Records, we got married on my deathbed
I could hear Jerry Heller in the hall
But I couldn't hear Cube and Dr. Dre no more at all
Through all the bullshit them niggaz was my dawgs
Niggaz With Attitudes spraypainted on the walls
I'm flatlinin, it's bad timin
(Straight Outta Compton), the king of gangsta rap's dyin
Cause of death, the AIDS virus
Conspiracy, I guess the government just hate violence
They thought my group influenced the L.A. riots
Woulda been here to see my kids grow, if I stayed quiet
Took 12 years for a real nigga to break silence
Eazy I had to let 'em know
You could catch me, cruisin down the street in my six-fo' 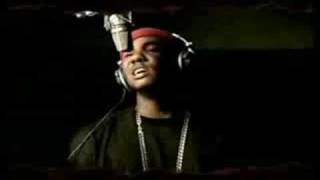