[Verse 1: G Herbo]
I come from where it's rob or get robbed, kill or be killed
The main goal just try and get home like Wrigley Field
Shells old, pop out revolvers, they hit him, he still
Can't trust a soul, they act like you owe 'em, don't hit 'em be still

[Verse 2: Lil Bibby]
I say I rap shit I really done did, really done lived
Every time I step in the booth, I tell 'em the truth
Glock forty with the clip, hangin' out the bottom
You get faced with all these problems tryna make it from the bottom

[Verse 3: G Herbo]
Hollows pop soon as we spot 'em
Spin the block, I think we got 'em
Street nigga hustle
War that's all I know, that's how I'm rockin'
Ten thousand in the pipe
The size my phone inside my pocket
I always cock it, I know niggas plottin'
Pray I won't drop 'em while everybody watching

[Verse 4: Lil Bibby]
Young nigga all about a profit
And I post up on the block with them goblins
Lil nigga starvin', lookin' like a target
If we see a stain then we gon' rob 'em, ayy
I was tryna stack a lil green
Go hard for the team, live a young nigga dream
I swear these young niggas
They'll probably go crazy if they seen all the shit that I've seen

[Verse 5: G Herbo]
Thirty clips, fifty clips, new MAC 11's
AK-47's with beams
Pull up on your block and straight clear the scene
Purposeful, ain't miss a thing
And now we get money, might blow out a beam
Used to just hop out the veen
Been rocking designer way before a teen
Triple OG the brand new miskeen

[Verse 6: Lil Bibby]
And I just might pull up in that new machine
I used to post up like a king
Herbo like Magic, I told him to pass it
I come with the hook like Kareem
You f*ckin' with bosses, I can't take no losses
If you double cross me, you better be cautious
I'm going crazy, I think I done lost it
Talkin' 'bout money then step in my office

[Verse 7: G Herbo]
Pop me a Perc, roll a 'Wood now I'm off it Me and Bibby in L.A. f*ckin' the booth up
It's three in the morning
And my outfit be always Givenchy and Balmain
My belt got Medusas
Got your bitch in my whip, gettin off Patron and hookah
And pourin' the juice up
And my shawty 'nem searchin', they riding with Rugers
They ready to shoot somethin'
In a Corvette, two gats
Ride with the roof back like, "f*ck nigga do somethin'"
Bitches see me, go "Who that?"
Yeah, big G Herbo, that nigga don't do that
f*ck bitches, get money, already knew that
Play with No Limit like play Russian roulette
Real nigga drew that, Nino from "New Jack"

[Verse 8: Lil Bibby]
These Hollywood dudes wanna kick it
But I'd rather chill with my niggas
I'd rather post up in the trenches
I just fit in with the killers
I come from where shit'd get serious
Niggas be lying on wax, I ain't feelin' 'em
Can't rap about shit you not livin' it
You should not spit the shit, you did not witness it
I use to post up with the green
Saw all the fiends, smokin' and sniffin' shit
Totin' them Glocks with the beams, bro let it ring
It boost my adrenaline
Niggas be all in they feelings
They actin' like bitches, I swear they so feminine
Play with my niggas, get burned up
Man they be so turnt up like they did some Ritalin

[Verse 9: G Herbo]
Pull through the opps like some villians
Nobody innocent, hop out and finish 'em
Niggas ain't give us the benefit
Don't care his age, if he bangin', we killin' him
And I grew up a lil hustler
Bumped to a plug, started off with a middleman
Riding the hood in a minivans
You ain't gon' blow guy, sit in the middle then
Free Crazy James, he been gone for like three
Tryin' give him fifteen, that mean he gotta sit for ten
Was gon' stand over a nigga and give him the clip
But fo'nem told me he a little man
Ain't even worth it, I had seventeen
Coulda got half, I'ma give him a little then
Your boo a ho, he don't go on no hit
Can't show him the scene, he gon' sing like Riperton 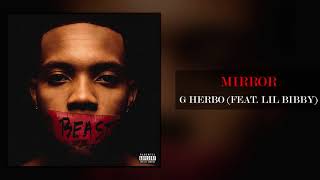