[50 Cent - Talking]
Yeah, niggas talking all that gangsta shit
Acting like my money ain't no good in the hood, you know what I mean?
f*cking head blown off nigga, you know?

[Chorus x2]
They, they talking that
That gangsta shit
They ain't about that
Man, matter of fact
Hand me my strap
Show me where they at
I'll stop 'em from talking like that

[50 Cent]
I'm the talk to hit every barbershop and beauty salon
Cause these other niggas that rap ain't on the shit that I'm on
Cause 50 this, 50 that, 50 stay with a gat
Thirty-two shots in the clip, hollow tips in the Mack
But when I come through, shh... the talking stop
My money long now, I can make the Pope get shot
Now, we can blow an hour talking bout the stones I rock
All the hoes I got, cause he stunts in the drop
Now, naw, you love the kids, 50 on that killa shit
That been mobbed the bad man, bitchy as guerilla shit
I'm marking my music like diesel on the block
So if you with me you gon' eat and you gon' starve if you not
Weed smokers love me like they love Buddha
I'll send your kids through the shooter, Crip niggas love me like they love Hoova
They tell me see careful good, cause niggas wanna see like you
They ain't used to a G like you, BLAM!

[Young Buck]
You think you a killer but we gon just pay 'em a visit
Put the potato in the barrel so nobody hear it
I keep a holster on my shoulder like I'm John Wayne
Shooting these niggas lights out like Lebron James
Holla my name, gimme a reason to see you bleeding After you feel these hollow tips, nigga, then we eating
Full of anger until there's no more bullets in the chamber
Ain't nothing like when you get popped and don't know who to blame-a
Nigga told me, "Do your dirt all by your lonely"
So I go hit them niggas 'fore 50 couldn't even hold me
I'm waiting, anticipating to put a nigga under
Smoking like we some Jamaicans f*cking with this ganja
Ride with no hesitation, retaliation is a must
Bad as I want to, some shit I just don't discuss
So point him out and watch how I knock him off
Everywhere you bitches go, I got a nigga watching ya'll, motherf*ckers!

[Lloyd Banks]
Come on, nigga, I ain't here to make no friends, just cut the checks
I got a long pump that'll put your stupid ass up in steps
Begging niggas don't understand though
Probably cause my hand glow when I'm anticipating the lambo
Lean out my bucket for niggas thinking they Rambo
You get one warning so I suggest you let your man know
These rap niggas portray to be tough, nobody acting soft
'Til they laid out in the hospital, eating applesauce
Usually for yapping off and turn apologetic
Waving a white flag, the danger they might have
My niggas buying so much ammo
If you reach in the couch for loose change, you'll probably feel on the handle
Holding sixteens to get your bandages and broke bones
So I suggest you get alarm systems in both homes
There's only one team on top, we number one with a glock
f*ck around and get your dumb ass SHOT! 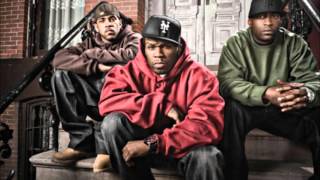