[Verse One: Kid Frost]
When I was a kid no one gave a f*ck about me
had to get my shit 'cause my parents use to doubt me
Got my first job working for the man
who picked me off the corner, see I got my first grand
and now I'm straight bankin' and payin' all the bills
my mama said "Who the f*ck did you have to kill?"
it ain't even like that, I'm slick as a Fox
I keep my gat hidden' in Nike shoe box
underneath my bed the cash kept flowin'
I gotta make sure my neighborhood keeps snowin'
My daddy use to say that "I was no good"
but If I didn't do it then somebody else would
and so I sell it by the pound and even provide the key
if somebody's gotta pay then It's gotta to be me
so when I hed south muthaf*cka' cause I owe a
payment that came in from Sinaloa
(Now I'm...)

[Verse Two: Kid Frost]
I've got the good shit that couldn't be bought
I'm rollin' up a Five with a truck full of f*ck
My Homeis on the corner like tricks in a hat
32 pounds it's like bricks in the back
I'm watchin' my speed limit let the chevrolet slide
Gotta keep it cool rollin' through Ocean Side Then I see this Pig, rollin' up on my ass
I let up on the gas, I was going kinda fast
Now I see the red light about to get beat
Man, I felt like my nut sack sankin' to the seat
I gave her my I.D plus my registration
and I gave her the place to my got damn station
and give me the keys so I can open up the trunk
man f*ck that shit
now it's one dead punk
(hahaha)

[Verse Three: Kid Frost]
I'm a mean muthaf*cka' and I want it
If I see something I don't got then I want it
and so I hide by the bushese at the stop light
a yo some my say that it's not right
but What am I to do?
get a job Homie check it
you got 6 felenies on your record
Man, you think pack tails ever gonna wan't me?
The tatoos on my arm are going to haunt me
I'm loading up my click in my (????????)
and some poor fulls about to get jacked
I'm waiting for the right one, Creeping through the white one
Looking for the tools and that stupid it's street dumb
and then I see the Little Rob lookin' reluctant
I put the gun on his head and now I gotta cut him
I went to pick up some clothes from my Homeboy's house
I hit a Five on a State Five going South and now I'm 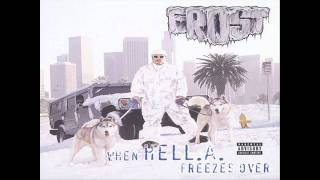