[Verse 1: Freddie Gibbs]
Slammin', used to sleep on the floor with a Kel-Tec
Got a bag I can't bag yet because it's still wet
Reaper man, I pay him a visit, ain't paid his bills yet
Brain hemorrhage, blunt-force trauma, I make him feel that
I wrap and seal that
Sent out the bricks that had the Nike Swoosh stamps, I'm just doin' it for the camp
Nigga showed 'em to the plug, now he shoppin' behind my back, uh
One thing about that bitch karma, she comin' back
If you trappin', keep a strap close
Nowadays, this shit became a trend to snake your homies out 'cause everybody backdoor
But everybody Black, though
I let the fiends catch a bеan, used to vomit off the secondhand crack smokе
Nigga got that PTSD from testin' the key
Gums numb, hope I didn't purchase work from the F-E-Ds
'Cause every time I see the judge, it's like a scary movie
f*ck the court, real nigga can't do no jury duty
Internet done altered this shit through a different game now
I don't rap about dead opps, I let his name die
Shame how they blackball Kane, they scratched my name out
I pushed it longer than I expected to get my name hot

[Chorus: Freddie Gibbs]
They wanna take me out this game like Sha'Carri
Black Illuminati, touch Big Rabbit, streets need a body
I got all of them leeches away from 'round me
You ain't rich enough to get me hit, p*ssy, go up the bounty, uh
[Verse 2: Freddie Gibbs]
Spend some cheese, bitch, chopper sing, bitch
Brew him up, had him huggin' them EMTs, bitch
Turn the witness to Stevie Wonder, ho, you ain't seen shit
Youngins on a mando' slide, this shit routine, bitch
Delta 88 with a cool knot in my tube socks
Now I push the goons through the boondocks in the Countach
Penthouse in the city, my bops givin' me rooftop
Told 'em free my nigga G-Weeder, ho, let the roots out
You feel my energy, they gon' remember me
Ain't never had a friend like me, your enemy my enemy
Lambo crashed the whip and got plates in both shoulders
If he didn't live through that accident, this shit could've been over, yeah

[Chorus: Freddie Gibbs]
They wanna take me out this game like Sha'Carri
Black Illuminati, afghan doggy straight off the poppy I ain't trust him, had to dust him like Christopher Moltisanti
And it hurt my heart to hurt you, but nigga, streets need a body, yeah
I don't house these hoes, bitch, get a hobby
She ain't workin', then you ain't got a wifey, you got a Tommie, yeah
I got all of them leeches away from 'round me
Bulletproof the Escalade, I got iron like Robert Downey, nigga, yeah

[Interlude: Freddie Gibbs & Jadakiss]
f*ck you lil' niggas (Uh)
(Triple-S exercise)
Kane
Kiss, haha
It's what we do, nigga
[Verse 3: Jadakiss]
I don't do the Chrome Heart, I just do the home art
You can catch a headshot or you can catch a dome dart
Go ahead and put the kids to sleep, this the grown part
'Fore we knew what Billboard was, we had our own chart
Strapped and they pull the car over, you take your own charge (Take that)
I ain't never worked for nobody, I sold my own hard (That's right)
Smoke a fat one in the back right in my own yard
Playin' dominoes with my man, he in the boneyard
Now I can pay for the jet right on my own card
Niggas tryna go man on me, I'm in the zone, God
Hand-to-hand with it, I ain't never played the phone, God
Calisthenics and cardio, just tryna tone, God (That's it)
Your man got the semi, but he ain't poppin'
My youngin got the bricks in the hemi, and he ain't stoppin'
Lil' extra in the beginning to get him coppin' (Uh-huh)
He ain't worried, 'cause if they get him, I get him Cochran (I got him)
He know not to f*ck with them bitches, they get him hot then (He know)
Stay low, finish the work, he get a drop Benz (Yeah)
They just wanna be around money, but they are not friends (Nah)
Until you fall back from 'em, that's where the plot ends (Yeah)
I've been reppin' the Apple since it was rotten (Mmh)
When you a G.O.A.T., then you can never be forgotten (Never)
They gotta ram it, you don't ever let the cops in (Never)
I can have your funeral in the top ten (Woo)
A lot of niggas are nice, but they are not him (Jada)
It's really nothing that you can do to stop him (Hater)
Call him the god MC just like Rakim (Woo)
And he done took some L's, but yeah, he got wins
Motherf*cker
Explain lyrics
Correct lyrics 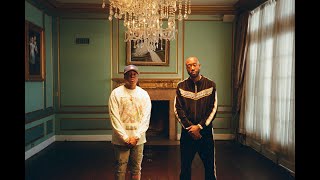