Some of you may know that the tango, which is not a
very popular dance anymore, was at one time reputed to
be a dance of unbridled passion. back in the old days
when it wasn't so easy to get you
Ks off, when it was hard to make contact with a member
of the opposite camp and you had to resort to things
like dancing close together and going hey...

Those were the days. well those days are probably gone
forever, I don't know, unless nixon is going to bring
them back a little bit later. but we have this very
special highly evolved permutated
O. it's actually a perverted tango. by the time... yes,
it's so perverted! this is the be-bop tango, a special
entertainment event that includes choreography a little
bit later, so watch out fol

The cowbell as a symbol of unbridled passion, ladies
and gentlemen.

Now, as you might have noticed, bruce fowler has just
completed some sort of trombone solo, based on the-ah,
idea of an evolved tango-event. bruce has also prepared
for you a demonstration of a
That he hopes will sweep the ocean right after the mud
shark did. bruce is now warming up the important
muscles of the body, in preparation...in preparation
for the real live be-bop tango which
E gonna demonstrate. napoleon will assist him. napoleon
just put your horn down, just relax, put your head
back, here comes the drill. okay, heh heh heh, you know
what I'm talkin' about? okay.

This is sort of like jazz in it's own peculiar way.
jazz is not dead, it just smells funny! okay, let's go!
yeah man, jazz man, you know what I mean? this is be-
bop, even though you think it doe
Sound like that. be-bop! now, as you might have
noticed, some of you with a musical education can tell
that the notes that george just sang when he went:
"this is be-bop, even though you th
T doesn't sound like that", is actually a sort of a
twisted form of the theme of the tango itself which
will get even more depraved as the number goes on.
george will now attempt to dismemb
At melody, play it and sing it at the same time
while... tu-dup. hey, that's the way! while we sort of
dance to it. okay, try it george. tu-dup, tu-dee... oh
yeah! as I was saying. now, what we'
E to do at this point is get some volunteers from the
audience to... I know you will, oh God you will... we
need some...heh heh heh... now, as a matter of fact you
did, didn't you... no, we wann
E some people who've never tried it bef
Ore, who've never even thought of trying it before. a
boy, a girl, preferably who like each other, who would
like to come up here and attempt to dance to what
george sings. do we have anybody wh

Your name is carl? please carl step on to the stage.
pleased to meet you carl. alright. okay? let's see-ah,
is there anybody in the, in the back? where...oh-oh, hey! what's your name?

Rick and jane and carl! alright, here's how it works:
there's a beat going on like this; that's a pedestrian
beat. you don't dance to that beat, you dance to what
george sings, okay? the little
Okay? the little quick ones, okay? ready? george, make
them dance!

Tu-dup, du-dee-da... let's study this phenomenon. tu-
duppy-dup-pu-dee-da... now look, rick and jane and
carl, you're, you're wonderful but you're just too
reserved. I still can... I know you wil
Ybe in a minute. okay, I'll t-tell you what: go back to
your seats and we'll bring up the next batch. okay?
carl, rick and jane! alright, you wanna try...?

Anything you say frank!

Du-dup-dee-dup... now that's more like it. du-dup-dee-
dup... lana, you're so good we have to bring up some
other people to assist you. brenda, imported from
edward's air force base, where she...
Es and gentlemen, brenda... brenda is a professional
harlot and she just got finished stripping for a bunch
of guys at edward's air force base, and she made it
down here in time for the show. tw
Rs of taking it off for the boys in the car, really
good. okay. heh. brenda, brenda has a lovely assistant
named carl, or robert james davis if you prefer. herb
cohen, ladies and gentlemen! okay
Ce!

Du-du-dip... you're still too adagio, I keep telling
you! du-dup-du-dee-da... turn on the bubble machine!
dup-dee-da, dup-dee-da... god, is that a cheap bubble-
machine! bow, du-du-du-du-du-da...
Es and gentlemen: don's ex-wife! ladies and gentlemen,
you're probably sitting in your chairs, saying to
yourselves: I could do that. and of course you can! and
now is your big chance! all you h
O do, the first step is easy, all you gotta do is stand
up. go ahead, just stand up. there you go, you are
standing up. yes, some of you are not standing up but
you won't have as much fun as the
Who are standing up. okay, turn on the big lights so
everybody can see what's going on. yes, very many of
you are standing up. okay, link your mind with the mind
of george duke! and when...

Du-dup... that's it! when he plays those funny fast
little notes, twitch around and have a good time with
the be-bop tango, let's try it! anything you wanna do
is alright. you gotta do anything
Anna do, it's alright. yes you got to know you came to
the right place, tonight. (give me some of that wine
now). as you might have guessed, ladies and gentlemen,
this is the end of our concert.
Ike to thank you ver... wanna thank you very much for
coming. hope you had a good time. bruce fowler on
trombone, napoleon murphy brock on tenor sax and lead
vocals, ruth underwood on percussion
Ph humphrey on drums, chester thompson on drums, tom
fowler on bass and george duke on the keyboards. thank
you very much. alright, alright... 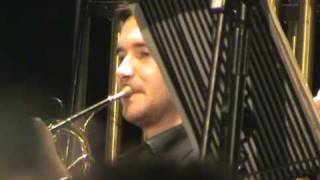