[Chorus]
MacGregor Park
Grooving on a Sunday
The sweetest park
Nigga, let's have a fun day
Just got a fresh fade
Frenchy's on my plate
MacGregor on Sunday

[Verse 1]
Southside of the H, born and raised in the tré
And I'll put three fingers in your motherf*cking face
I do it for the city but a nigga ain't Drake
Don't think that the H just all about drank
Now a days some may say that the boy is a saint
Back in the day I was bad boy like Mase
In the park, after dark, drinking Mad Dog
Me and my niggas and some girls tryna have a ball
I remember one time (one time)
It was half past 9:00pm (past 9pm)
Cop car pulled up
Everybody ducked down in the truck
Cop said, "where's the blunt?"
Didn't wanna give it up
Had a vision of prison and didn't wanna budge
Didn't have a lot so I threw out the bud
Officer, can you show a little love to a thug?
(Don't move!)
Then I seen the gun by his side
Fire in his eyes
I gotta ride out, slide out
Head out to the hideout
Hit 'em in the nuts
Hope the judge don't find out
[Verse 2]
Sunday, hit H-E-B on OST
Start cooking 'round 3:00pm
Heard a horn, Lord, who could it be?
Is that my nigga Bun B?
Nah, it's a B tryna S my D
Want me to take her to MacGregor, hit it on the leaves
In the fall, in the winter, in the summer and the spring
She throw that P on a G
José, get the ice and the models and the bottle It don't matter 'bout the price
Just make it nice
I got dice, who got cash?
Play a stack if you 'bout that
Spend a little, make a lot back
Take a catnap
Wake up, then I break a nigga for more racks
I threw 9 down, 5 down
His watch is mine now
And a Louis purse
Hope his girl don't find out

[Verse 3]
Played a game of 21, had to hit 'em with a layup
Made 'em jump when I Kriss Krossed like A.I
Then I saw a couple laid up
Told the lovebirds stay fly
Hey ya, if you shake it like a Polaroid
Throw it on ya boy
Yep, bring it this way now
It's a beautiful day in the tré
I ball and parlay without the bald fade now
I got respect for the west and the nawf
But the southside of the city
Niggas sitting real pretty
3rd Ward, from the gritty to the saditty
South Park where anybody really can get it
Telephone Road all the way to Mo City
Yellastone yellabones got big titties
If you rep but you ain't got a rep really
I'm not a Que Dog, y'all can't step with me
One day in the park niggas stepped to me
Cause they heard that a girl wanna get with me
Now they say they homeboy wanna get with me
I said, "really? Y'all don't wanna get silly."
He hit me with a right, I hit 'em with a left
Out of breath
Heart beating right up out my chest
Get down, head down
Hit 'em with your best now
My face a mess
But they'll never wanna plex now
Explain lyrics
Correct lyrics 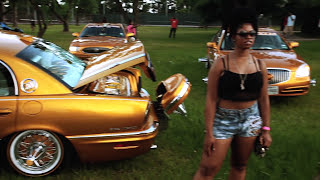 check amazon for MacGregor Park mp3 download
these lyrics are submitted by itunes3
browse other artists under F:F2F3F4F5
Record Label(s): 2017 First One Up
Official lyrics by