Rising from a black bondage below into the pre-past
Legendary ancient mask now summoned by magicians
See massive retaliation out of the abyss
Who is the first to encounter darkened fate like this?
A once deserted battlefield - above Exumer's face
A glance up to the thunderous skies
Ascension day - today

Britain under Norman terror, innocent the victims
Thrashing, raping, burning, killing, slaying, now revenge
Young Hasting defender lowers the mask to his face
Long forgotten force within begins the deadly race
An invocation to be witnessed by the fighting masses
The moons of Leng, a sea of blood
The ascension of the mask

The war - that you have fought so hard
The end will not come so soon
So warrior - you think that you have won
This time you better think twice
You're wrong -you cannot escape your fate
Forged in the realms of war
Listen - there is no invincible strength
As there is no eternal life ... die!

Crying screams of disillusionment into the night
A fighter victorious, now consumed by fright
The steel mask he's wearing it won't come off
From inside the steel spikes push slowly in his eyes
Paying the prize of hybris on the field of war
The sorcerer he laughs/Ascension day - today 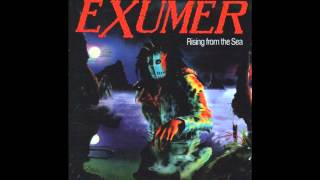