Kill the radio, he killed the radio...
Today in new dealer's stock..
Truck over turned, what they call it was a roll over accident,
It was a dump truck,
Debris in the roadway, east bound, and west bound....
It's acid rap.... Ohh yeaaaah...
I've seen many bloody bodies in my life time,
Now I'm on the prowl, and it's night time.
Son of the wicket, I kick it,
Five fingers of death,
I can taste the smell of blood as you're losin' you're breath,
Nine bodies floatin' in the river,
This the type of shit that make ya shiver, when I deliver,
The first dead body on your door step,
When you open up the door, the body falls on the floor.
The bigger they are, the harder the fall,
Then their head pops off and rolls down the hall.
Blood stains all on my shoe strangs,
Two bodies swingin' in the back, and they hang,
From a tree butt naked,
Three lives are gone, and the fourth I must take it. The fourth body, just mutilated,
Every bone was broken in the body, when they x-rayed it.
I gotta cravin' for some red rum,
So I went to the store, saw the clerk, and got me some,
One person found dead in the liquor store,
A mass murderer, five murders or more.
Now I'm workin' on my sixth one,
I kill bitches with my bare hands, mutha f*ck a gun.
Beat a bitch with a bat, til she stop breathin',
Then rush the bloody body to receivin',
Seven and eight, came like a double date,
I stabbed 'em both in the heart, with a wooden stake.
Like the bitch was a f*ckin' vampire,
Lit the fuse, and set they soul on fire.
Number nine....
This my own life,
It was found, with a nine to the head.
And I'm dead, and I'm dead,
No, you're dead,
Call the cops,
Shit, somebody call the cops.
Explain lyrics
Correct lyrics 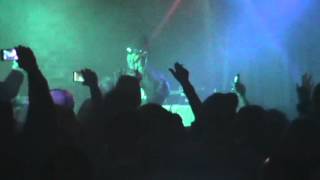