Yeah, ya know? Critics man
Critics never got nothin' nice to say, man
You know the one thing I notice about critics, man?
Is critics never ask me how my day went
Well, I'mma tell 'em

Yesterday my dog died, I hog tied a ho, tied her in a bow
Said next time you blow up try to spit a flow
You wanna criticize dog try a little mo'
I'm so tired of this I could blow, fire in the hole
I'm fired up so fire up the lighter and the 'dro
Better hold on a little tighter here I go

Flows tighter, hot headed as ghost rider
Cold hearted as spiderman throwin' a spider in the snow
So ya better get to blowin in flow rider
Inside of a low rider with no tires in the hole
Why am I like this? Why is winter cold?
Why is it when I talk, I'm so biased to the hoes?

Listen dog, Christmas is off, this is as soft as it gets
This isn't gob this is a blister in the salt
Those are your wounds this is the salt, so get lost
Shit dissin' me is just like pissin' off the wizard of oz
Wrap a lizard in gauze, beat you in the jaws with it
Grab the scissors and saws

And cut out your livers gizzards and balls
Throw you in the middle of the ocean in the blizzard with jaws
So sip piss like sizzurp through a straw
Then describe how it tasted like dessert to us all
Got the gall to make Chris piss in his draws
Ticklin' him go to his grave, skip him and visit his dog

You're on fire
That's how ya know your on a roll
'Cause when you hot it's like your burnin' up everyone else's cold
Your on fire
Man, I'm so f*ckin' sick, I got ambulances pullin' me over and shit

You're on fire
Ya need to stop drop and roll 'cause when you say the shit
To give the whole hip hop shop the blow
You're on fire, yeah, you're on fire

I just wrote a bullshit hook in between two long ass verses
If you mistook the for a song, look
This ain't a song it's a warnin' to Brooke Hogan and David Cook That the crook just took over so book

Run as fast as you can, stop writin' and kill it
I'm lightning in a skillet, your a f*ckin' flash in a pan
I pop up you bitches scatter like hot grease splashin' a fan
Mr Mathers is the man

Yeah, I'm pissed but I would rather take this energy
And stash it in a can, come back and whip your ass with it again
Salivas like sulfuric acid in your hand it'll eat through
Anything metal the ass of iron man

Turn him into plastic so for you to think
That you could stand a f*ckin' chance is assanine
Yeah, ask the nine man, hit a blind man with a coloring book
And told him color inside the lines or get hit widda fine crayon

f*ck it I ain't playin', pull up in a van and hop out
At a homeless man holdin' a sign sayin'
Vietnam vet, I'm out my f*ckin' mind, man
Kick over the can beat his ass and leave him 9 grand

Sayin' you sick, quit playin' you prick don't nobody care
Then why the f*ck am I yellin' at air
I ain't even talkin' to no one 'cause ain't nobody there
Nobody will f*ckin' test me 'cause these hos won't even dare

I'm wastin' punchlines but I got so many to spare
I just thought of another one that might go here
Naw, don't waste it save it, psycho, yeah
Plus you gotta rewrite those lines that you said about Michael's hair

You're on fire
That's how ya know your on a roll
'Cause when you hot it's like your burnin' up everyone else's cold
You're on fire
Man, I'm so hot my motherf*ckin' firetrucks on fire, homie 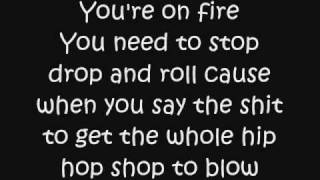