Nutz On Ya Chin Lyrics

Nutz On Ya Chin Lyrics


One and in comes the two to the muthaphukkin three then comes the Eazy
to the other f*ckin E playin niggaz life like a puppet and can't dance but
could touch it so f*ck it rappers want to dis I'm glad to see `em cause I
rip your f*ckin face outta a magazine O.G. gangsta lean now after I shit
your face wipes that ass clean now time to get tipsy and don't want a bitch
if she can't rub the balls like a gypsy. Who's all in? Since you put yourself
on my dick I put my nutz on ya chin...

Muthaphukk whatcha heard I'm more than that a real nigga from the hood
and I'm all that thick as a hicky a picky nigga fittin dickies with bitches
strictly dick-ly many sets I rolled on and killed squeals that told on my
homies they sold on don't ask Eazy shit it's still a hit iz a hit and a bitch
iz a bitch hangin on my nutz like a hair strand hangin there with n'ear heart
and n'ear plan ass out like a asshole runnin to my dick with a rhyme and
a lasso again and again from beginning to end it's your nutz on my
chin...

You couldn't beat a minute of my ass if I gave you sixty seconds tick tock shit starts I start a steppin E to the muthaphukkin A to the muthaphukkin
Z here's the Y here's the E here to stay after you when I'm through check
me and Rodney King f*ck Tha Police part 2 now back to my friends nutz to
ya nose to ya lips to ya chin real niggaz love us hussies never f*ck us the
roughest ruckas fingers couldn't touch us Eazy E's back again f*ck waitin'
for a payday get an A.K. everyday is a blast yeah blast a nigga fast knock
his ass get all the cash Who's all in? Since you put yourself on my dick
I put my nutz on ya chin...

"N.W.A. Niggaz With Attitudes, we're underground reporters we tell about,
you know, the streets and everything that goes on, you know, around in Compton,
our area, what's going around around us, we don't know what the f*ck's going
around around by YOU, but frankly we don't give a f*ck, you know. Most kids
in Compton don't give a f*ck who the mayor or the president is you know they're
not even interested in votin'. And the police, you know what I'm sayin?
I say f*ck `EM."
Explain lyrics
Correct lyrics 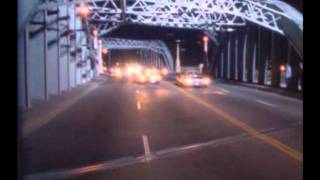