[Yella]
Yo this is Yella
as we wine down to the final song
I wanted to make this one to remember my lil nigga E
I know he wanted this track on his record
though he was takin' from us to god damn soon
so I finished for him peace nigga...

[Eazy-E]
We did a song f*ck da police you know
and everybody been hearing f*ck sayin'
f*ck da police for years and years and years
and finally it took a muthaphukka to video tape
a nigga gettin' the shit beat out of him
for everybody else to say f*ck da police
and we did f*ck da police people put us down
and sayed we were ahead of our time you know it
took the video you know ya shot by accident
to tell the truth and open the worlds eyes
yes we do have a serious problem in L.A.
and other citys true retaliate happens all the time
people tryin' to change things for years but I don't
think anything is gonna help the problem is to deep
N.W.A. is just being brutally honest.

[Eazy-E]
They swearin' on cable T.V. it ain't teachin'
nobody nothin' new cause little kids grow up
you know one, two years old hearin' there mother
sayin' f*ck this, you little son of bitch I beat
the shit out of you and all this shit and you know
they pick up from all the shit and you know so they
learn shit you know it's not gonna be teachin' muthaphukkaz nothin' new cause I got some new words
for your ass.

[Eazy-E]
We don't tell you to go out and gang bang
we tell you ya know and our songs is as you
know if you could go out stealin' and killin'
and beatin' up people all day but that person
ends up dead or in jail sometimes he gets away
you know and we don't have no rags no red no blue
rags and tellin' we gonna go out and creep or go
out and do that other thing or whateva it is
you know we aint tell you to be joinin' no gang
or whateva else.

[Yella]
Eazy-Muthaphukkin-E
The Hip-Hop Thugsta
from the C-P-T
Compton Style
Real Niggaz
Nigga For Life
We don't Die..(x3)
I'd like to send all my love out to his kids
and my God Son Derik, Little D
to all his family
to his wife and everybody who loved him
and the people that didn't love 'em
yo E tell these niggaz whats up
"I say f*ck 'Em"
hehehehaha
I tried thats right f*ck these Muthaphukkaz
to all the real niggaz out there
we still in this muthaphukka
beware...96 Style....96 Style
Yeah Big Man we out.

[Eazy-E]
As I was sayin' before
see you around buddy boy
I'm feelin' to f*ck all
goodbye
hahahahahaahahahmmmmhehehemhmhhmhheeheheheheeh
oooooooooooooh Shit!
Explain lyrics
Correct lyrics 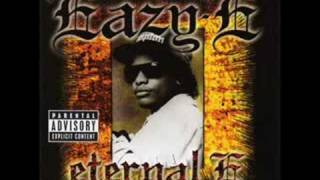