Yo Ren, you're ready to go get this move?
(Believe that, boy)
You're strapped?
(Yeah, you know it)
Let's go do this, man, I got it all planned out
(Yeah, shoot any motherf*cker that moves)

This is a stick-up, everybody get face-down
Ren, gag their mouths so they can't make a sound
Tie em up for the fact that I'm kickin ass
I got my hand on my gat, and I'm tempted to blast
My name is Eazy, but I go the hard way out
This ain't personal, but now I'm about
to commit a crime and go thru with it
You know what, no need for shakin, because I'm used to it
Take out the security guard with a slap of my hand
Yeah, he's wearin' a badge, but he's a ol ass man
Pump his ass in the head, and take his gun
so me and the punk can go one on one
Cover the lens on the TV screen
you know, so me and my gang just can't be seen
Lock the doors, and throw away the key
Close the blinds, so no motherf*ckers can see
and smile, you know, cause I'm controllin the shit
and no sucker ass nigga's gonna stop the hit
Wardrobes and locs, and a Ruthless shirt
That means I'm ready to work, and rush a fool to the dirt, so

(Alright, anybody move and I'll blow your f*ckin head off)

Allright...
Empty your pockets, but do it slow
Take everything you got and lay it on the f*ckin floor
Don't make me have to set an example today
and blow one of you crazy motherf*ckers away
I'm in a bank, and it's a little bit funny
takin all you stupid motherf*ckers' money
Peepin at a bitch cause my dick's on hard
Laughin at the dumb ass security guard
who's tied up for the moment, not sayin' a word
I should have known it before, the motherf*cker's a nerd
But back to the bitches I'm peepin
and then untie the hoe, so I can start creepin
Took her to the backroom, about to jack
Cold trailed the bitch, with a gun in the back
I said: "Lay down, and unbutton your bra!"
There was the biggest titties that a nigga ever saw
I said: "Damn", then the air got thinner
Only thought in my mind, was goin' up in her
The suspense was makin' me sick She took her panties down and the bitch had a dick!
I said: "Damn", dropped the gat from my hand
(What I thought was a bitch, was nothing but a man)
Put the gat to his legs, all the way up his skirt
because this is one faggot that I had to hurt, so

(I said get down. I want you all face-down on the floor
Anybody moves and I shoot)

Stackin up the money and there's more to collect
cause I don't give a f*ck, I take traveler's checks
Yo, Ren, peep out the window, and tell me what you see
(Three motherf*ckin police starin at me; what to do now?)
Hurry up and get on
Allright, tell me, who is the motherf*ckin alarm?
I'm a give ya a chance, and count to three
or else five of ya bitches are comin with me
([Police:] Allright, Allright, come out niggaz, or we're coming in
This is the only chance to turn yourself in)
f*ck you! We got hostages, and plenty of loot
and don't give a damn and not afraid to shoot
We're sendin out the hostages, all except five
and if you don't meet our demands, they won't stay alive
We want a copter, so we can get away clean
and take some p*ssy along, if you know what I mean
One hostage got brave, and got off the floor
but I smoked his ass before he got to the door
([Police:] They shot a hostage, they shot a hostage!)
([MC Ren:] You stupid motherf*cker tryin' to run
now you're dead as f*ck tryin' to race a gun)
([Police:] Allright, this is the last chance to get off your ass
or else the tear gas is about to blast)
I ran to the back and Ren followed behind
to a hell of a spot that was hard to find
The bank was f*cked up, the shit was smokin
with screamin hostages, runnin and chokin
Gettin away, but I was suddenly stopped
at point blank range, by a motherf*ckin cop
And I hope they don't think that a lesson was taught
cause a nigga like the E was finally caught
My gat wouldn't fire, the shit wouldn't work
So, y'all know what time it is

([Police:] Well I'm giving you five seconds to let us thru the gate or
I'm gonna shoot two of your guards)

(Hehe, they got me once, but they'll never get me again) 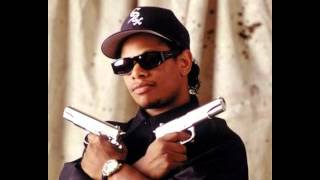