N.Y. City, crime around me, drug dynasties
death and robberies
on the dark blocks where bodies bleed
jake inside the P.J.'s, the heat waves
kids play where heat sprays
straight floods, no love, fake thugs
draw blood with Four-Four snubs
tear away your rug
kids with clout
up in the Range Rover with chicks, spray in their mouth
drain 'em out, set up for the wet up, bang 'em out
these streets in Queens remain the murder scene, blood stain 'em out
[repeat]

Inside the chambers of Hell
where all the L puffin' niggas dwell
and fell 'cause of a loss of blood cells
bullet shells, glass is shattered
shit gets torn and tattered
niggas brains is splattered on sewage drains when they be goin' at it
static over addicts, revolvers and automatics
it's illmatic how I seen one catch two in the cabbage
from an initial, official shiny nickel played pistols
sparklin' like crystals, launchin' missiles
domes get blown like whistles
ain't no jokin', niggas will leave you and your Momma soakin'
and smokin' and blown open
bodies found in Hoboken
kids comittin' murder after murder
shit is real so I feel for the ones that don't pack steel and burners
bodies be droppin' down around Queens
by different teams, it's the Teens that tear your ass out the frame by
the seams
the end of the drama center, niggas you want drama?
word to Momma come equipped with two clips and body armor.

Yeah, it's that young fella, Jinx Da Juvy
fly lil' nigga, iced out with a fresh brand new Coogi
jigged out, wig spinned out with waves
pockets full of the Franklins, I stay gettin' paid
stay stackin' papes, plus my Fam flip cakes while some of us rap, other fellas flip 'caine
rock big chains, what ya'll think this a game?
Murder incorp. slash open cases with cartels
we do things that make the Mob tell
the way we go outta state and flip more cakes then Carvel
ya'll play the cut, and watch this lil' nigga prevail
'cause I spit much hotter than Hell
so why ya'll playa hate and plot to creep on mine
I pay ya'll no mind, but violate and speak to the Nine
I'm a B.K. Son of a gun
when I spit 16 bars ya'll rap niggas dial 911
I'm only 14, and ya'll rap dudes ready to run
this ain't a game, ain't no time for fun
I'm the young rap Lord, so I gotta hold it down
it's Easy Mo Bee, G. Rap and Jinx Da Juvenile.

Crushed with the ice, get rushed for your life
busted in twice, stuck with a knife
on these rough nights we hustle and heist
put heaters to your Man and double the price
snuffin' your lights, shake you like a couple of dice
nothin' is nice, prepare for combat
firearm cats with long gats, end up where you get embalmed at
lay on the floor flat, pull the gat format
direct beside your door mat
cock the Fours back, blow out your Whore's back
leave the kids wigs tore back
my niggas ride with me like horseback
go to war rats, niggas you strapped? let me take that
G. Rap face slap all of these fake cats
and unofficials, get gun missiles clapped in your lung tissue
me and my Dun's'll hit you, slugs not even one'll miss you
tons of pistols
kid, you got guns?, you should've brung 'em wit' you
them niggas runnin' wit' you
caught 'em and hung 'em wit' you
no games, out to blow frames with Fo' flames
at close range, have all you niggas lookin' for Rogaine. 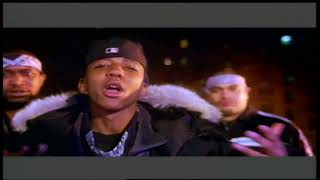 check amazon for N.y.c. mp3 download
these lyrics are submitted by kaan
browse other artists under E:E2E3E4E5E6