On the Fourth of July 1806 we set sail from the sweet
cove of Cork
We were sailing away with a cargo of bricks for the
grand City Hall in New York
'twas a wonderful craft, she was rigged for and aft and
oh, how the wild wind drove her
She stood several blasts, she had twenty-seven masts
and they called her the Irish Rover

There was awl Mickey Coote who played hard on his flute
when the ladies lined up for a set
He was tootlin' with skill for each sparkling
quadrille, though the dancers were fluther'd and bet
With his smart witty talk, he was cock of the walk and
he rolled the dames under and over
They all knew at a glance when he took up his stance
that he sailed in the Irish Rover

For a sailor it`s a bother of life, it`s so lonesome by
night and by day
When he longs for the shore and a charming young whore
who will melt all his troubles away
All the noise and the rout swillin` poitin and stout,
for him soon is done and over
Of the love of a maid he is never afraid, that ould
salt from the Irish rover

We had sailed seven years when the measles broke out
and the ship lost it's way in the fog
And that whale of a crew was reduced down to two, just
meself and the Captain's old dog
Then the ship struck a rock, Oh Lord! what a shock, the
bulkhead was turned right over
Turned nine times around and the poor old dog was
drowned, I`m the last of the Irish Rover 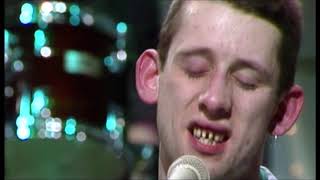