The clouds started forming at five o'clock pm
The funnel clouds touched down
five miles north of Russellville
Sirens were blowing, clouds spat rain
and as the things came threw, it sounded like a train

"It came without no warning" said Bobbi Jo McLean
She and husband Nolen always loved to watch the rain
It sucked him out the window, he ain't come home again
All she can remember is "It sounded like a train"

Pieces of that truck stop, litter up the highway, I been told And I hear that missing trucker ended up in Kansas
(or maybe it was Oz).

The Nightmare Tour ended for my band and me
the night all the shit went down
A homecoming concert, the night the tornadoes hit my hometown.
The few who braved the weather were sucked out of the auditorium
I can still remember the sound of their applause in the rain
as it echoed through them storm clouds, I swear, It sounded like a train. 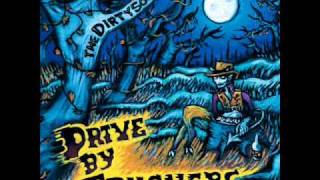