Before I could walk, I had a wrench in my hand
I was my Mama's little angel and my Daddy's second chance
He went end over end the first year he went pro
Lost part of his eyesight and he couldn't race no more

He would put me on his lap when he'd drive and I'd take the wheel
He'd say "What do you think about that son? How does she feel?
You just wait till them little legs get long enough to reach the gas
Once you put her on the floor one time there ain't no turning back"

Every Saturday, he'd take me out to the garage
He'd take an empty bucket and fill it full of engine parts
He's sit me down and pour em out in front of me on the floor
I'd have to tell him what each one was and what each one was for

Before I turned 18 Daddy said "Now pretty soon
You'll be old enough to drive but I'll leave it up to you
I taught you all about it, taught you everything I know
You gotta have a car to do it and you gotta work and buy your own" The first one I bought was a Mustang #2
Nobody kept'em any longer than they kept a pair of shoes
They started showing up at every used car lot in town
A V-8 on a go-cart, easy terms, no money down

Me and Daddy and my uncle took her home and tore her down
Checked her out real good, cleaned her up and bored her out
Took out all the seats, pulled the carpet off the floor
Knocked out all the glass and welded up the doors

The first time that I raced my qualifying was a shame
I started out way in the back and came back about the same
I pulled her in the pit, couldn't look my Daddy in the eye
He said "If you quit now son, it's gonna haunt you all your life" 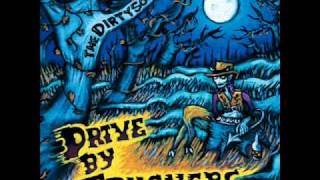