Bitches ain't shit but hoes and tricks
Lick on deez nutz and suck the dick
Get's the f*ck out after you're done
And I hops in my ride to make a quick run...

[Dr. Dre]
I used to know a bitch named Eric Wright
We used to roll around and f*ck the hoes at night
Tight than a mutharf*cka with the gangsta beats
And we was ballin' on the muthaf*ckin' Compton streets
Peep, the shit got deep and it was on
Number 1 song after number 1 song
Long as my muthaf*ckin' pockets was fat
I didn't give a f*ck where the bitch was at
But she was hangin' with a white bitch doin' the shit she do
Suckin' on his dick just to get a buck or 2
And the few ends she got didn't mean nothin'
Now she's suing cuz the shit she be doin' ain't shit
Bitch can't hang with the streets, she found herself short
So now she's takin' me to court
It's real conversation for your ass
So recognize and pass to Daz

[Dat Nigga Daz]
Now as i'm rollin' with my nigga Dre and Eastwood
f*ckin' hoes, clockin' dough up to no good
We flip flop and serve hoes like flap jacks
(Snoop: But we don't love them hoes) Bitch, and it's like that
This is what you look for in a ho who got cash flow
Ya run up in them hoes and grab the cash
And get your dash on
While you're chillin', with your homies and shit
And how my niggaz kick the anthem like this

[Kurupt]
...To the store, to get me a 4-0
Snoop Doggy Dogg paged, that must mean more hoes
So I head down the street to long beach
Just so i could meet, a freak
To lick me from my head to my feet
And I'm here, now I'm ready to be done up
Nothin' but homies around so I puts my gun up
Bitches on my nuts like clothes
But i'm from the pound and we don't love them hoes
How could you trust a hoe? [Snoop:] Why? [echoed 3X]
Cuz a hoe's a trick
We don't love them tricks [Snoop:] Why? [echoed 3X] Cuz a trick's a bitch
And my dick's constantly in her mouth
And turnin' them trick ass hoes the f*ck out
Now...

[Snoop Doggy Dogg]
I once had a bitch named Mandy May
Used to be up in them guts like everyday
The p*ssy was the bomb, had a nigga on sprung
I was in love like a muthaf*cka lickin' the protung
The homies used to tell me that she wasn't no good
But I'm the maniac in black, Mr. Snoop Eastwood
So I figure niggaz wouldn't trip with mine
Guess what? Got gaffled by one time
I'm back to the muthaf*ckin' county jail
6 months on my chest, now it's time to bail
I get's released on a hot sunny day
My nigga D.O.C. and my homey Dr Dre
Scooped in a coupe, Snoop we got news
Your girl was trickin' while you was draped in your county blues
I ain't been out a second
And already gotta do some muthaf*ckin chin checkin
Move up the block as we groove down the block
See my girl's house, Dre, pass the glock
Kick in the do', I look on the flo'
It's my little cousin Daz and he's f*ckin' my hoe, yo
(Bitches ain't shit)
I uncocked my shit...I'm heart-broke but I'm still loc'ed
Man, f*ck a bitch!

[Jewell]
(Dr. Dre in background "Bitches ain't shit")
I don't give a f*ck about a bitch
But i and her know that they can't fade this
Cause i'm doin my own thingdown with the swang
I'm hangin' with Death Row like it ain't no thing
I say you know can't deal
Cuz I'm a btich that's real
Motherf*cker need to step back, hell yeah
They need to chill
Because I don't give a f*ck
And I don't give a f*ck [x3]

And now I gotta do some...
And now I gotta do some shit that's clean
But when I'm on a dick, hell yeah, I get real mean
Like a washing machine
I can wash the clothes
All the hoes knows
That i'm on the flo' ho
But they can't hang with my type on swang
I ain't tryin' to say I suck every ding-a-lang
But just the juicy ones
Witht he tip of the tongue
And then their sprung
With the nuts hung
[Dr. Dre:] Bitches ain't shit 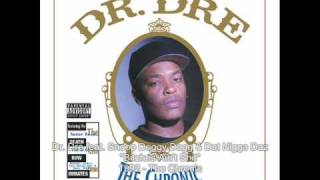