Ayy!!Rhymin' is a skill that I perfected
And all around the world I'm nuch respected
For all the "dope" beats that's been selected
You tape them on your tape and then eject it
From your box and run down the block
Now the whole neighborhood's in a state os shock
Feel electricity you wonder who's he?
The rhymes seems to change and it varys
In different forms and different sizes
It paralyzes and energizes
And it surprises me I thought you knew
You don't know who it is Guess?Who?
I take time and patience,public relations
Stand and scan the demand in the nation
With expertise and a new release
Make another well known rapper seem deceased
And keep him under
Make him wonder
Nine to five and if he don't survive
That's just another brother that's been buried alive
'Cause time is money
Money is time
And I got just enough time to say my rhymes
And connect each phrase,keep a crowd in amazement
I wear a suit to important engagements
Turn the whole house out,rock the old and the young
Record at Daily Planet and mix a Chung...King
And any song taht you heard me sing
It don't mean a thing if it ain't got swing
And it surprises me,I thought you knew
You don't know who it is?....GUESS?WHO?

Movin' and groovin' to music that's smoothin'
It's been proven by us
Biters rust,girlies lust,rappers are crazy fussed Mandatory,definite no question,a must
Keep goin'time,keeps goin', the truth is glowin'
Everybody knows inside
Who makes the world dance,world wide!
Do the Doug E. Fresh Groove or the James Brown Slide
Or the Benetton,we could go on and on
'Till the song is gone or just groove off the 808 Bong
Or take it higher,inside fire,starts to perspire
There's no time to tire
Or max
Try to relax
How could you whip me on the mike?
Chill Will and Barry Bee is on the wax
Cuttin' it up as sharp as an axe.....Like this....

Lesson in dressin' some rappers be guessin'
Short changin' you,it's so depressin'
Transgression,Hip Hop session
All we use is spirit,heart and a whole lot of flesh and bone
All rhymes my own
Kickin' it wicked on the microphone
Solo,hollow,Hip Hop desperato
Don't play me homeboy,play Lotto
Keep the party flowin' as time pass by
And some ask the question,Why?
Will I do it,run right through it
Those that know me,they already knew
It was dope,before I did it
Left an impression,how can you forget it?
The Greatest Entertainer that's my name-a
Flakin' and breakin' on the stage is my game
Rock the whole house 'til the party is through
I won't ask who 'cause now you know who! 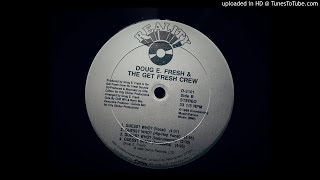 check amazon for Guess Who mp3 download
these lyrics are submitted by kaan
browse other artists under D:D2D3D4D5D6D7D8D9D10