From N.Y. to the motherf*ckin N.O.
{Whaaaaaaaaaaaat?} What's up Envy nigga?

Hey, hey, nigga what's up?
His body get bucked so put some Hennessy in a cup
I'ma snatch me a hoe before I leave this bitch
Tell the DJ he better play my shit
That shit right there, is platinum off the top
You already know my reputation, I will f*ck with the cops
Whatever I'm at, guns and drugs involved
That gangsta shit bouncin from wall to wall
Women got in free and it's six to one
I'm f*ckin some before it's done
If I don't know shit I know how to get that green
Like gettin them for 20, sellin them for 15
I got six hoes, that love me right
They'll love you too, if you're payin me right
I'm not that kind of cat that'll write books
but I could paint a picture in the ghetto on a lightpost {Desert, Storm}

[Petey Pablo]
HEYYYY baby, you seen who's that came in the do'?
Ain't that that Carolina nigga they say that's outta control?
I'm off the rocker nothin can stop me, I'm HOTTER THAN HOT
Then got the Juvenile sweat the whole game around, YOU BETTER WATCH HIM
'Fore I f*ck around and come to your house
Park in your momma flowers and cuss the BIRD NIGGA TO COME OUT I'm crazy baby, I'm wild
I don't know if you heard about it but baby I been this way for a while
I got some NEW SCHOOL
The cables that supposed to be ATTACHED TO THE SCREWS
That done come loose and I don't know what to hook 'em to
Juve', Juve' - you better tell 'em what this thang'll do
SOUTHSIDE, RIDE OR DIE, fool who you talkin to? (YOU!)
I got enough to go 'round, my shit'll hit you from Uptown
And you know I'm from North Carolina!
Lay 'em down for real - a done deal, done deal
Pigeon-toed, long nose, bald headed NIGGA!

[Coke]
I'm the newer headbussa, baller bitch, bread toucher
Caddy white trucker, dropper, red gutter
Shut down the summer and ranger's newcomer
Ice blue and the rims look like cucumbers
I'm a hustler I serve the fiends
When it's ready I turn that light on like Krispy Kreme man
Set up shop, O.T. in small farms
Like I got that dope and her-on, ear from hair on
Y'all don't really want no beef with I
I'm at your crib ith the ratchet like Allen I.
So you could jump if you want {f*ckA!}
You get crunk if you want {SUCKA!}
But I got asthma and I always keep the pump f*cka {f*ckA!}
Blow your brains on the dash like "Menace"
To identify you they gon' have to call yo' dentist
Coke keys, oasis where the heat be
Holla at a playa in the street, when you need me 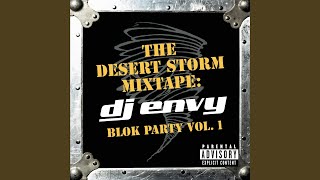