That shit sound like some superhero music right there (okay)
Sound like my theme muh'f*cking song right there
(Desert Storm Mixtape, Volume 1) I like this one
I can groove to this one; Skane Dollar where we at? Clue!
Desert Storm, yeah, let's get it (whaaaaaaaaaaaat?)

[Jay-Z]
Watch on arm, rims on tire
Hov' in the studio, the roof's on fire {Yeah!}
S. Carter kicks on my feet {Woo!}
Roc-A-Wear on my leg, Envy on the beat
I made my first mill' off papi on the hill
I made in the rap game speakin on the reels (that's real)
I'm bling cause I passed the statute of limitation
and I'm makin too much money to be goin to jail (hell nah)
Who else you know on probation
leave the country for a month to go on vacation? (*laughing*)
Listeners, get your brain on drugs
Listen up, it's the flawless like cocaine dust
Her-on hero, do any thing for dinero
Like Joe Pesci, Hov' is so deadly
In the middle of the ocean, racin on jet skits (*PYOOM!*)
Get your mind right or get it on your left sleeve {ENVY!} S.C., Jay-Z, either or
Young Hova, Big Homie, read 'em off
Daddy is home, niggaz are scared {Yup!}
Way before I put the key in the door
Ain't no other kings in this rap game, you kiddin?
Nuttin but my children, one shot, they disappearin
.. I'm on a whole 'nother level
I don't take your Jacob watch, I just screw off the bezel

[Jay-Z]
Rapper/slash, murderer/slash
Punk muh'f*ckers I will murder your ass
Gangster somebody soon to be dad
"Blueprint 2" homie, junior is mad
Mad cause his new son sound a little better
Knock a little harder, show the growth in his father
Similar in robberies, damn you gotta love it
All that spells in the air in better music for the public 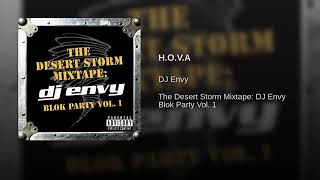 check amazon for H.o.v.a. mp3 download
these lyrics are submitted by kaan
browse other artists under D:D2D3D4D5D6D7D8D9D10