The End Of Your World Lyrics

The End Of Your World Lyrics


[Verse 1]
I hit the 28th floor, step into a boardroom filled with execs
Manager flippin', five seconds from breakin' they necks
All of a sudden I threw in a cassette
The room's filled with silence, all eyes on me, they wonder what's next
New rule suckas, y'all lose suckas
Scream when you had enough punishment, after this I run the shit
Pack your bags, I push rappers in front of moving cabs
You wanna swing with us, but I'm duckin' your jabs
A mindreader, I pounce like a cheetah or a panther
With a Walkman on, high on Anthrax
If your question "Where them raw niggas?", here's your answer
Girls (pick up the panties), aiyyo thugs (get out your handguns)
Now turn 'em on yourself
I got your style in my fridge on the shelf next to the tofu
A roadblock in niggas' careers, you can't go through
Raw is the nigga to fear, and rehearsal's where y'all should go to

[Verse 2]
There's always been wack rappers, they been here a second after rap's start
But I don't know why real MCs let 'em get this far
But as the new caretaker of hip-hop's graveyard
Reclaiming the dead, I got new jacks wettin' they bed
Hop on like the boogieman and f*ckin' sever they head
Or bury them alive, and suffocate 'em instead
Fill they tombstones out, throw your ass in a ditch
'Cause when you in my zone, you die when you forget
Like when you forget who you are, or forget how to spit
Niggas bit Biggie Smalls, now they think they the shit
I remember everybody rhymed like Rakim
Niggas used to tongue-twist, it's gotten worse than then
Nowadays you're all hustlers with a billy(?) stash
Don't give a f*ck, 'cause it's all about the cash
And what is beef, sleep with the heat?
Yeah right, with water guns y'all wouldn't wet up Sesame Street 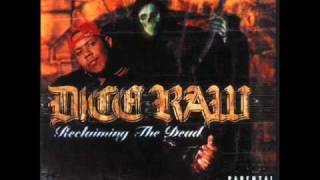