Soldier’s logic, capture the essence and hold it hostage,
Like passengers controllin’ cock-pits with loaded glock clips,
Won’t stop till pigs fly in solar comets, chased by exploding rockets,
Through hell while its frozen solid, see,
Nostradamus predicted the approach of Bolic,
With a weapon armed like Megatron’s shoulder socket,
Coz’ im the future, hold court and prosecute ya’.
Till I cock the ruger and your f*ckin history like Karma Sutra,
I’m worshiped like god Garuda or the tribe of Judah,
Coz’ my medulla oblongata got a cocked bazooka,
And i’ll just shoot ya’, while vagabonds tag along,
Who are trained to operate on soldiers like Trapper John,
Who wanna bet I’m sick than seven plagues of Babylon,
Let’s shake on it, I’ll slap your palm so hard I snap your arm,
The battles on and you’ll realize god is vengeful,
With the odds against you like suicide bombin’ Mohammed’s temple,
I’m monumental so imma go from non-essential,
To a memory mentioned next to “can it be all so simple?”,
But can’t afford to sell, mama never wore Chanel,
I was born during a five alarm fire storm in hell,
And i swore to tell the story how we fell from glory,
So throw Hait’s in reverse, back the hell up off me,
You don’t have the balls to deal with a Neanderthal,
Catapultin’ dead body’s over the kings castle wall.

Hahaha, this what happens,
When you mix alot of beer, with alot more weed,
Multiplied by fifteen bar fights, Its Diabolic, nigga...
Its Rebel Armz muthaf*cka! Stomp the shit out you,
f*ck everything you stand for...

Yo,
I’ll never taste my pride, I’ll never change, never say and die,
Like a native tribe despite the smallpox they provide,
f*ck the game, I’ll take it by storm and break inside,
And maybe i flood the streets with crack like its ’85,
Rainy skies and clouds’ll form, the crowds’ll swarm, To hear my album songs, kneel down and bow before,
Sound the horns; I arrived in a crown of thorns,
To power bomb blocks when I drop like ______,
Now it’s on, took a breathe of air, said a prayer,
Threw you down a flight of heavens stairs into the devils lair,
And I continue this genocide with Engineer,
Till they light up our electric chairs like florescent flares,
Never cared if what goes around comes back around,
To track us down like canine units with Basset hounds,
These are battlegrounds, I watch them unfold,
And see them turn men to animals like Doctor Moreau,
So i run into the lion’s den with a squad of iron men,
Spittin’ like there’s viral stem cells in my sinus flem,
I’ll die and rise again, then make water wine,
Coz’ i ride driving bent, and drink all the time,
Don’t wanna sign to a label I never need,
I’m a genetic breed, doing more leg work than centipedes,
Best believe I’d bleed to set us free and I’m blessed to be real,
That’s why the soldier’s here next to me.

Yo, we bang out till your muthaf*ckin’ medulla oblongata hang out, nigga,
It’s Diabolic, he’s a liar, he’s a thief, he’s a goon,
He’s a muthaf*ckin’ criminal, he’s a degenerate louse, he’s a drunk,
Hahahaha.....and that my muthaf*ckin’ dude!
I’m Poison Pen, Money Shot, P.
Wipe it off your chin and gargle it down, mof*cka,
Rebel Armz all day! Yo...
You ever got centipeded before? That's getting stomped by fifty dudes,
Thats a hundred feet! That's the Rebel Armz as we centipedes nigga,
Yo, I been waiting for this album a long time man, know what im sayin?
So yo check this out, imma sit the f*ck back,
I got a leader right here, righ next to me in the lab, yo SouthPaw
Crack the muthaf*ckin bottle man, f*ck ya’ll niggas... 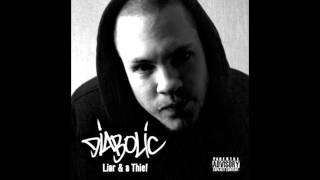