Yeah Yeah, they want 64 bars, I want 64 whips and yards
And I don't care who they think they are, 'cause I'll laugh at your staff
And I'll carve them in half, I'm positive like H.I.V
I'll bury MC's on SB.TV, so deep that they will only have to reaper to me
Say hello to the demons for me, and don't think cause I've just been signed
I ain't still the most venomous grime mc
I'll catalyse half of the scene and to making songs with the hearts on their sleeves
So tell your whole team that I'm iller, you can't see me like an evening with Cilla
That's why I find them hard to believe, when there talking greased like there larger than me
If you ain't heard of me, that's perjury, none of them men couldn't verbally murder me
I'll break in my doctors surgery, ransack the drugs and then get arrested for burglary
It's quite sick, cause only 6 years ago, none of them cunts had never heard of me, I'm like a cigarette
I'll hurt you internally, but they can't put me down, they keep burnin' me
So f*ck anyone hatin' on me, I'm great in the scene and that's blatent to see
I'll kill you off like an ancient disease, my name spread like the great plague of the streets
You can't turn the tables on me, there ain't a MC, I'm unable to beat
So take my advice and wisely retreat, Devlin the biggest MC this side of the sea
Minute and a half, I'll bury anybody with the lyrics in my bars Ripping you in half cause I'm lyrically advanced, if you look up in the sky I'll be sitting in the stars
I'm walking down the road to Zion, like Damien Marley and Nas
All your staff will get scarred, if we ever cross paths, it ain't long like giraffes
You will be laying on your arse and asking where the f*ck you are
I'm the captain, you can't take charge of my craft, you're in deep with Jim if you can't swim
I won't even throw you a raft, scream SOS, I'll just laugh 'cause I'm back with a bang, like a bomb in Iraq
With a crash and a flash and a spark, I creep in the night like a thief in the dark
So anybody reckoning of levelling with Devlin, will get left f*cked like their features are feminine
'Cause you can't keep up with the pace and the rate that I keep on developing, so investigate like Kojack
And you'll know that I injected the whole grime scene with a shot of adrenaline, now watch me resurrect grime from the dead again
Cause whether you like me is irrelevant you can't deny talent when it's evident, I'm off the scales I'm in inadequate measurement
Most of these men have got a vocal impediment, my names Devs, I'm a local degenerate, so I drink and I smoke for the hell of it
Play the beat and I'll carry on deadin' it, this is war there's 64 from Devlin! 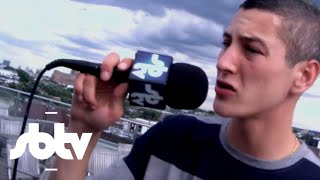 check amazon for F64 mp3 download
these lyrics are submitted by kaan
browse other artists under D:D2D3D4D5D6D7D8D9D10