A lifetime of dreaming, visualising paradise
I woke and rolled over and told my girl we’re leaving
It’s time to sacrifice a lot
cause you ain’t happy with your job
and round here it’s like nothin’ seems appealing
So let me know you feel the same
throw your life into a case and walk the path from Victoria this evening
And then embark upon a path of rediscovery
searching for the fruits from the lost garden of Eden
I’m wondering if I runaway and came back another day,
then would the young men who roll with metal put the guns away
and would the devil have took charge or would the slum be safe
I pray the latter’s right for everybody’s mumsy’s sake.
and if I dissappear for years and reappear
would my natural intuition still be crystal clear?
Or would I have lost clarity?
In this trivial pursuit we’re walking through so casually

[Yasmin - Chorus]
I gotta leave, I gotta go,
there’s nothing here for me no moreDevlin Verse 2]
We share a last cigerette, then walk into the station

purchase two tickets to an alien destanation
Board the train and witness pain on all the faces of multi-cultural races
but not me and my girl we’re breaking free
like an escapist, cuz we need to escape this
and I for one have got my mind made up,
even if where we stay is make-shift
I can’t remain in this domain of semi ape sh-t, because all I see is hatred
I wonder if I dissappeared how many men would miss me
or would they all forget like I erased my name from history?
I’m still trying yet to make a break within the chain of pain and misery and vanish off the planet like a mystery.
and if I did return would things be the same or worse?
You see the gear stick shift and then the whip reverse and I’d be straight back on my travels
Burning rubber over gravel ’til we see the English Channel

Devlin Verse 3]
As the carriage pulls away, I pull my lady closer and I tell her she’s okay
‘Coz if we never broke the barricades today we’d always be afraid
and left to feel threatened in this dark and deadly maze
But now I’ve come of age, and as the train starts enterin’ suburbia a smile comes across my face
The unwinding of eternal rage, that was locked up inside just like my mates behind prison gates
If I could runaway and come back another day,
I’d let the song play, on the summer’s longest day.
Kick back and just enjoy the raves, with a lager and a spliff to blaze.
If I ever contemplate returning to this crazy place
I’d leave it long enough so they don’t recognise my face
I’d let the song play, on the summer’s longest day
While I roll upon the roads along the motorway 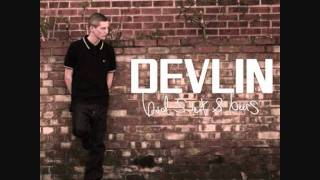