[Defari]
A different caliber of MC
This track is filthy, word to O.J., you make me feel guilty
of first degree soundbwoy murder
Unlike anything out of L.A. you ever heard of
Word up, you play with fire, you'll get burned up
Best believe that my shit sound the best, when it's turned up
Loud, mashin down the block suburban style
Eighteen speakers plus kit chromed out
Yo, you think that you f*ckin pro?
On the low the other night I caught your wack-ass stage show
Oh.. boy, you're just a bore
But you tell everybody that you're like Busta
and you got "Rhymes Galore"
Mmm mmm mmm, ain't that somethin?
Got the nerve to call yourself an MC, man you be frontin
I don't apologize, oh yeah, and uh
go back to school, learn some concepts and grammar
Of yourself, get a hold
Next time you on stage, use Primatine for some breath control
(Ha ha ha) But now don't let asthma be the excuse
You was definitely doper, when no one knew you

[Defari]
You was stone cold lyin by the full wack rhyme writin
If I had some gasoline I'd ignite it, with my lighter..
.. BOOM! You combust, cause you disgust me
Wacker than them flat-ass crackers on Three's Company
You walk around, mad cause no one's feelin you
Mad at me, cause all your peoples they know my lyrics too
They sing along cause my song bumps
on the mix tapes that YOU made, yet and still you try to playa hate (What?) You're featherweight, weaker than a paper plate
Lyrically, when compared to me, I know your style is fake
Fraud, manufactures, cheaper than Hyundai
Now you're hardcore you probably used to be a true nerd guy
Make up your mind guy, now you're the Mr. Get High guy
If you ever step to me you'll think French because you're f*ckin fried
in the mix of my verbal assault fightin sticks
You shouldn't gamble cause round for round you can't handle this

[Defari]
Cat was out of pocket, got socked in his jaw
Fell to the floor, that's all she wrote
But I wrote rhymes, that burn every time
On mad mix shows I got wreck off the mind
But what's in a rhyme, if it don't sound tight?
You ask me if a lot of rappers are wack man you DAMN right
Who's to say these brothers from L.A.
will take charge like DeBarge and shine, in a special way?
I say okay, let's get paid
Let's put this money on Putnam and sip bombays with dis lemonade
Use, Gatorade to refuel
electrolytes after I ignite this mic too
Yo what's my name? Defari Herut
By the way since you been askin all these questions
who the hell are you?
I seen your kind before, no lie
A devil spy, disguised as an ambassador
You can't fool the Divine Sun Rule
Word to blue magic - step right up - and see the Likwit Crew
Hurry hurry, get your tickets, stand in line
After the show it's at the Towers on Sunset and Vine
Me and my niggaz at the bar sippin Henny
Got your bitch open all night, as if her name was Denny's 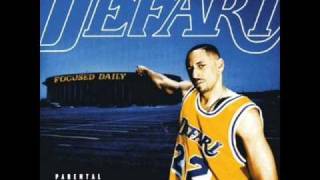