Let me tell you of a place once known as Earth
Now just a number, a symbol
Used by its cosmic enemy
Who planned our destruction for millenia
Waiting, patiently for man to weaken himself to the point of ruin
In the century of the vital, man strengthened
And came together as one strong race of warriors
From the void rose the Virvum Juggernauts
Vicious creatures craving the life force of men
Within them lied a transforming parasite
A genеtically morphing mimicry of life
They unleashеd the Xeno-Virus
Many were altered at the cellular level
And absorbed into a mass of unrecognizable terror
However, a much worse and formidable attack came in the form of soul Stealing technologies
As the life force was drained from billions, the horde became stronger
Now Lost and subservient, we were forced to bow to the new usurpers of Earth
Many years later, a new hope arose
That of a benevolent race, who planted help for us here long before man
Walked the earth
It was they, the Elder ones, who spawned the Nucleus and sent it through oceans of space and time
It remained hidden in the deep, waiting for the right moment to spore the seeds that will wipe this retched scorn from our planet and unleash man's true power!
Explain lyrics
Correct lyrics 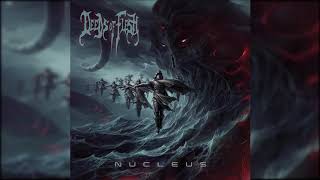