Yo (yo), yo (yo), yo (yo)
Piggity-presto, who these cats on your stereo? (Das EFX)
My records spin round and round like a merry-go
Here we go, riggity-raw as I ever was
Diggy Das blow the spot, sharp as ever, cuz
Same pro (what?), never rock with the same flow
My chain glow like lines up in the rainbow
Aiyo, Boogie Bang what the deal, son? (Yo)
For real, son, break it down, how you feel, dun?

Yo, when my record company fail, I'm gonna need bail (why?)
Flippin on coats like Latrell Sprewell
My cat's gone broke off blowin weed sales
Can't see mine, dickhead, you're gonna need braille
Like females, cats is fake, I snap and break
your biggity-back and neck and crack the safe
Snatch the cake, get in the truck, divi' it up
Not givin the one just give me ya cup
We're livin it up, my crew get buck in berry singers
Shows get wild like Jerry Springer, ice on all fingers
Frost bear, me and my girls fare
New York share politican, so

Cos I'm too nice, rockin blue ice
Jet black Ferrari runnin thru lights
My crew tight, riggity-roll with the ruggedness
Enough of this, yo it's time to put a thug in this
Look at this, straight Gz, you can tell it's dope
In your face, kid, you don't need a telescope Smellin smoke, break the mic, make sure it's broke
????, you can quote every word I wrote
My antidote, stiggity-straight from the subway
The thug way, miggity-Monday to Sunday

Lyrical dum-dums, watch the stray shots
stay hot like them chicks from Baywatch
BK, to the UK, all the way to Guatalupe
Das got chicks shakin their booty
Cats actin unrul-ey, who they?
Do they, should they, give a f*ck, nah too late
Save em, ya gotcha els, roll em up, kid
Blaze em, roll a whole dime but save some
Throw your hands up, raise em, hip-hop nation
Nuff respects to my EFX Generation

Aiyo dun son, hit me, brought the whole gang wit me
Sixty, peace to low down shifty
Strictly, send the world in a frenzy
My mens be, laid up in the penzy
Correctly, when it's my turn to rhyme again
Devils stall, play the ball, went to Heineken
Find a friend, hit her off with the fly talk
The sly talk, riggity-right off the sidewalk
My talk, slidin with the sickedness
You're lickin this like a lollipop, sick of this

Miggity-makin moves on a regular, wack MC's I'm testin ya
Smack you with a chair like a wrestler
Boogie Bang, sewer rat buckwildin
Run the streets of Brooklyn, properties on an island
A pen and a pad, you know my steez when I'm weeded
Bring rhymes together like cleavage
So love it or leave it, I got to eat, kid, plus got mouths to feed
hip-hop crowds to please, bullshit trials to plea
Trees are blastin out my team, blast back
Matter fact, my game is tight and that's that 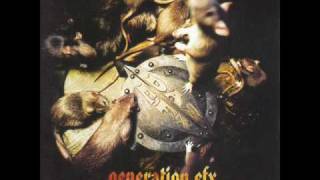