I followed you over the border down to the Spree
You were standing alone by the water waiting for me
We wandered along by the river, the towers all shrouded in haze
& we kissed by the wire and they all held their fire
In the good old bad old days

All the streetlights were waltzing together, crimson & green
& your dress was as gray as the weather, oh what a dream
We built up a city of whispers and classified war dossiers
I gave you control of my papers and soul

Now Alyosha is gathering flowers every May & the statue of Marx by the tower faces away
By the wall is a souvenir table with hammers & sickles displayed
On new watches, that work, and they're sold by a Turk
In these good old bad new days

So don't look for a final solution here in Berlin
For capitalist prostitution comes from within
Don't worry about revolution we'll just keep the aesthetic clichés
In this market of fleas, selling klezmer CDs
For the good old bad old days

So Genossen, tavarishi, let's make a toast
To the time when the state knew your name
And we'll all say “l'chaim“, “na zdrovye“ und “Prost“
To that braver old world where we all are the same
Where nobody loses & everyone wins
Just as long as each comrade obeys
But that's all in the past so let's raise up a glass
To the good old bad old days
Explain lyrics
Correct lyrics 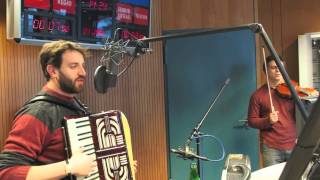