The Children Of Lir Lyrics

The Children Of Lir Lyrics

In a time of myth and magic,
lived a man of timeless power,
Lir was his name,
but his temper had turned sour.
He would not be king of the land,
Bov Dearg was chosen instead.
Lir would pay no tribute to him,
And secretly wished he was dead.

Alas with time Lir's wife did lie,
and he was full of great sadness,
Dearg heard this and sent word to Lir,
to meet with him in his palace.
When they met they both embraced,
Their friendship was made then.
Dearg summoned his daughter eve,
And told Lir he must marry again,

Lir's love for Eve was as strong as with his first wife,
A seed was planted, Fionnula and Aedh were born.
But her next child birth would take away her life,
Fiachra and Conn, from their mothers stomach were torn.

Lir's sadness knew no bounds -
he cried out to the night,
Dearg was there to comfort him
and help him see the light.
He had 4 beautiful children
and with time another bride,
Eve's sister Aoife would stay loyal to his side.

But Aiofe had a jealous side - a canker in her mind,
She moved against the children, love for them she could not find.
She took them in her chariot to a lake not far away. And changed them into swans like night time into day.

300 years on Derravaragh, so commenced the spell,
the children would swim to the shore, their story to tell.
300 years on the sea of Moyle, a cruel and bitter place,
The children missed their father here, the smile upon his face.

In the sea of Moyle the waves did crash,
and beat the land with might,
The rain fell fierce and the wind blew hard,
the swans all feared for their lives.
Fionnula was strong and wisest of all,
And guarded her brothers from strife.
Under her wings they hid from night,
And waited for the morning light.

Finally the day did come,
to leave this terrible sea,
300 more years to live as swans,
then they at last would be free.
To Inish Gluaire the swans did fly,
As fast as they could go.
New lands and kingdoms everywhere -
Fionnula did see down below.

There they waited, till at last the day did dawn,
The spell was ending,
they felt themselves transform.
They were now ancient,
their youth was gone forever,
And as they died,
they held hands and went together. 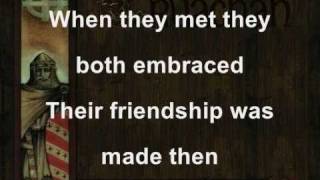