He Is Risen Lyrics

Total views: 4 times this weekRating: 6.74/10 [19 votes]
Craig Smith - He Is Risen
Father Me Lord Of All The Earth Ancient Of Days The Child Will Be Sculptor Of My Heart Rest That Remains Refuge Pure Heart Jehovah Glory To The Holy One
He Is Risen video Craig Smith twitter

He Is Risen Lyrics


Craig Smith
Matthew 28:6
Prophets foretold the Messiah would come
Born from the womb of a virgin
His name Emmanuel, God's chosen one
Many blind eyes would receive Him
He spoke with authority, He healed the lame
And the captive cries out to His name
Chorus
He is risen
Just as He said
He is risen
He is risen
Up from the dead
He is risen
He taught that the Kingdom of God was at hand
And that He and the Father are one
Preaching repentance throughout all the land
And redemption would be through the Son
When the Pharisees, they went into a rage
And plotted an end to His days
Chorus
Beaten and mocked, He would be crucified
The sentence of death He carried
Thorns on His head and a wound in His side
He gave up His breath and was buried
He rose from the grave the Son of the Highest
The Horn of Salvation is Jesus
The one mediator between man & God, Jesus the Lord
Chorus
He is risen
Light of the world
He is risen
The Commander, Messiah
Is risen
Son of the Highest
He is risen
The great, mighty God
Lord of all
Jesus is God's fulfillment of His promise given in the old testament. That
promise was a substitute for the sin of each man, by the shed blood of
God's only Son Jesus. Just as the prophet (Isaiah 7:14) foretold. God's
chosen One, Immanuel was born of a virgin. Even as a child of twelve He
astonished the priest (Luke 2:47) with the authority with which He spoke.
His ministry did not actually begin until the age of thirty. But in a span of
three years his life changed the world forever. He preformed numerous
miracles, healing the lame (John 5:8), the blind (Matthew 20:34) even raising
the dead (John 11:43-44). Those trapped by sin, then and now, call on His
name to be set free.
His teaching was radical. Speaking of such things as the kingdom of heaven
is at hand (Matthew 3:2), now is the day of salvation (2 Cor. 6:2), to know Him
was to know the Father (John 14:7). The theme of His message focused on our
need of repentance, and forgiveness of our sins. He boldly stated He was
the only accepted path to forgiveness and fellowship with God. That unless
a man repent of his sins and receive Jesus as his Savior, he could not
enter heaven (Acts 4:12).
For this teaching He enraged the Pharisees, who jealously guarded the
religious control of the people. Thus keeping them in bondage to a false
legalism. This is what the Bible in Proverbs 14:12 tells us, the ways of man
are the ways of death. True to the prophesy of old, He became the Lamb
without a spot or blemish, to be sacrificed for our sin. He who had known no
sin (2 Cor. 5:21), was beaten, mocked, spit on, and crowned with a crown of
thorns. Then in His final act of obedience He suffered the cross. Giving up
His last breath He accomplished what none of us ever could. Jesus became
the perfect and acceptable substitute for our sin. Thus we now have an
avenue to eternal life through Jesus the Messiah. With the resurrection
comes the crushing of the head of Satan. Death no longer has to mean
separation from God. Now as we turn to the Risen One, the Mediator
between man and his Creator, the Horn of Salvation, the Light of the world,
the Commander, we share in His victory of all eternity.--Ron Stumbaugh
Explain lyrics
Correct lyrics 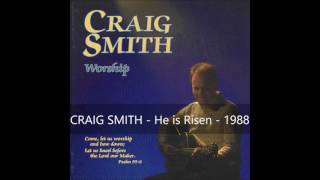 check amazon for He Is Risen mp3 download
browse other artists under C:C2C3C4C5C6C7C8